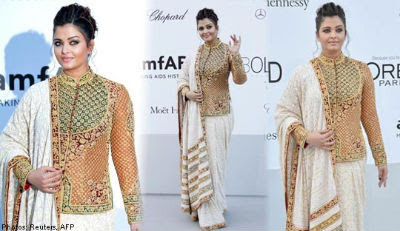 HOW much weight is too much? That is the question which is raging across India. The woman caught in the middle of the fierce storm is former Miss World and Bollywood superstar Aishwarya Rai.

Ash, who is married to actor Abhishek Bachchan, became a mother to a baby girl six months ago.

Ever since, fans, media and netizens have all weighed in on why she isn't losing all the pounds she piled on during pregnancy.

In a country where millions survive on less than a dollar a day, the obsession with how celebrities look has garnered international attention, the Times of India reported.

She came under intense scrutiny not just for her sartorial choice, but her weight as well.

All wrapped up in a designer sari, the actress looked less than perfect in pictures, and the outfit was panned by Indian online media site NDTV.

We have to admit, her appearance at Cannes this year pales in comparison to her previous glamorous makeovers.

Sure, she doesn't look like her usual svelte self, but if the time given to preen and prep is devoted now instead to being a mum, we say, carry on. (asiaone.com)
Posted by sabahkini.net at 10:30