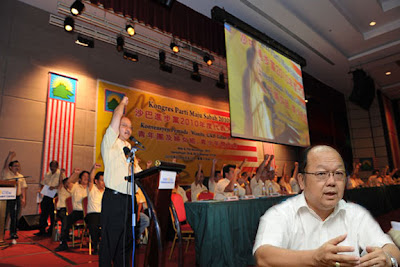 KOTA KINABALU: SAPP will launch its election manifesto on June 3 this year, the second day of the party’s Biennial Delegates Conference.

The two-day meet will start with a Malam Muhibbah on the evening of June 2 at the Star City Convention Hall while the conference proper will be held on June 3, commencing at 9.30 am.

Leaders of the opposition parties such as Parti Keadilan Rakyat (PKR), DAP, PAS and STAR from both State and national levels have been invited to the opening of the SAPP Conference in the morning of June 3, 2012.

SAPP secretary general, Datuk Richard Yong said, “We expect this conference to have a huge turnout as this is the conference before the pending general elections which may be held anytime from now.”

Party members from  all over Sabah are anxious to come to the conference, where the leaders and members will meet, interact and participate in debating the policy speech by the Party President to be delivered at the opening of the conference.

It is anticipated that 1,500 delegates and observers will attend the two-day conference.

“We would like to remind the delegates from outstation to register themselves at the party’s office located at Bornion Commercial Centre at Luyang on June 2 or at the venue of conference at Star City from 8am – 9.30am on June 3, 2012, said Richard. (theborneopost)