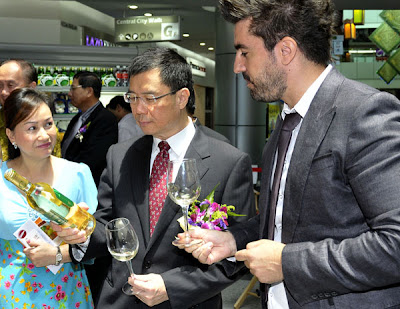 SABAHANS have got a taste for wine. And they speak of their rising affluence. Twenty years ago, it was difficult to find the right wine to go with a meal in Kota Kinabalu, according to Dr Yee Moh Chai, a Deputy Chief Minister, who launched Sabah’s first food and wine fair at City Mall in Kota Kinabalu on August 25.

Now industry sources say the local wine market is worth at least 10m ringgit ($3.2m). And there is a wide selection of wine from France, Italy, Spain, Australia, Chile and other South American countries.

Malaysians are the 10th largest consumers of alcohol, spending about 1.5 billion ringgit mostly on beer, brandy and whisky. But Malaysia’s import of wine has been growing and is worth slightly more than 100m ringgit a year.

Industry sources say wine drinking has risen among Sabahans largely because they have become richer and thus are able to spend on wine. Also health reports that red wine may be good for their heart have made it their preference.

Depending on its quality, a 750ml bottle of red wine sells between 58 and 198 ringgit.

Company officials say imports have increased by a fifth compared to five years ago. AsiaEuro says half of their wine is from Chile. Wine from Australia, France and Italy makes up 40% while the rest comes from Germany, Spain and Argentina.

Chan Yim Fong, 59, says she took to wine five years ago. Her favourite is Merlot, a red wine which goes with her meaty meals. She buys her wine from supermarkets.

Consumers learned to pair wine with their meal at the fair which also introduced beef, lamb and cheese from Australia, America, Denmark, France and New Zealand. (Insight Sabah)
Posted by sabahkini.net at 08:24