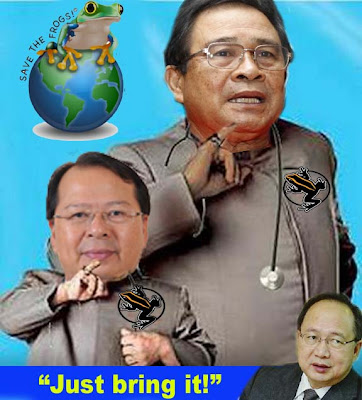 ALLOWED.....The Upko President says he supports review of the anti-hopping law provided those who hopped be allowed to stand as candidates again in the ensuing by-elections.

Under the current provision of the Federal Constitution, he said a member of parliament or state assemblyman who resigned was disqualified from contesting as a member of the House of Representatives (or State Legislative Assembly) for a period of five years, effective from the date of resignation.

“It is very unfortunate that an elected representative who resigns or is forced to resign for some reasons and subsequently joins other party, is not allowed to offer himself as candidate in the ensuing by-elections.

“Yes, we can have an anti-hopping law but allow those who are hopping to stand for a by-election,” he told reporters after launching the Rubber National Key Economic Area (NKEA) programme for Penampang district at Kampung Timpangoh, Sugud, near here today.

Dompok, who is also Primary Industries and Commodities Minister, was asked to comment on a recent proposal by Penang DAP to enact an anti-hopping law.

Recently, Penang Chief Minister Lim Guan Eng was quoted as saying that the state was looking at enacting an anti-hopping law in November, ahead of the 13th general election which must be called by next April.

Yesterday, Sabah Deputy Chief Minister and Parti Bersatu Sabah (PBS) president Joseph Pairin Kitingan said there was merit in bringing about a review of the anti-hopping law to stop politicians from changing parties after being elected to Parliament or the State Legislative Assemblies.

The then-PBS government in Sabah had enacted such a law in the 1980s but it was later declared ultra vires the Federal Constitution as it restrained one’s freedom of association.

The anti-hopping law is basically aimed at curtailing elected representatives, who won the election on a certain political party ticket, to cross over to another party.

On claims by Pakatan Rakyat that the opposition is getting stronger in Sabah, Dompok said the Barisan Nasional’s (BN) fate could only be decided by the Sabah people through the ballot box.

“Anyone can make such claims but at the end of the day, the people have the final say through the ballot box. Of course, like other parties, we are facing challenges in maintaining BN’s rule in the years to come,” he said.

As for Upko, he said the party was very much alive and kicking despite the departure of several of its leaders, including former Upko deputy president Wilfred Bumburing and vice-president senator Maijol Mahap, to join forces with Pakatan.

The Penampang MP also brushed aside claims there was mass exodus of party members who joined the opposition.

Asked whether the Upko supreme meeting on Aug 24, had discussed its status in BN, Dompok said it was not in the party’s meeting agenda.

He said the list of candidates for Upko’s allocated seats, including the Tuaran parlimentary constituency, had already been submitted to the BN leadership for perusal.