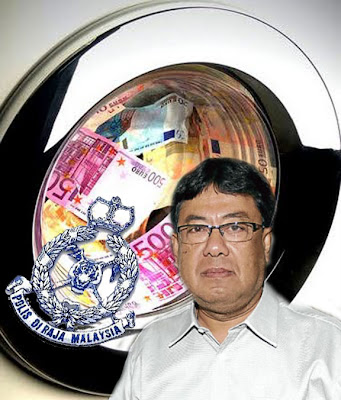 JOHOR BARU : Police Superintendent was today sentenced to two years' jail for each of the four counts of money laundering by the Sessions Court here. Azmi Osman, 55, was also fined RM1.75 million for the offences committed between 2002 and 2005.

Salawati later allowed Azmi to be freed on RM900,000 bail in two sureties and a stay of execution pending an appeal on the decision.

In November last year, Johor Baru High Court judge Datuk Abdul Halim Aman had set aside the decision of the Sessions Court and directed the case to be transferred back to the Sessions Court in which Salawati had acquitted Azmi following the failure of the prosecution to prove a prima facie against the accused.

Azmi, who is currently suspended from duty, was alleged to have committed the four offences of money laundering totalling RM3.8 million between 2002 and 2005 when he was an officer of the Secret Societies, Gambling and Vice Division in Johor.

For the first and second charges, the accused was alleged to have received RM2.08 million and RM679,850 proceeds from money laundering through his Maybank current account in Mentakab, Pahang between February 6 and December 20, 2002 as well as January 15 and October 2 in 2003.

For the third and fourth charges, he was alleged to have received RM941,930 and RM250,000 for the same activity through another Maybank current account at the City Square Shopping Centre, Johor Baru on January 13, 2004 and April 5 in 2005, respectively.

Prosecution was conducted by Malaysian Anti-Corruption Commission deputy public prosecutors Hazril Harun and Mohd Farez Abd Rahman while the accused was represented by Adam Yap and CN Sritharan. (Bernama)
Posted by sabahkini.net at 16:54