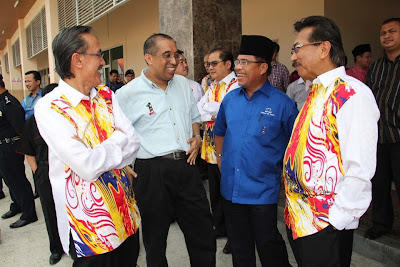 KOTA KINABALU: Sabah Umno has brushed off claims of a shake-up in the party and that its strongman Musa Aman could well be on the way out ahead of the crucial general election.

“Musa is doing an excellent job leading the party and the state government and the prime minister himself has complimented Musa’s leadership,” he said recently.

“Sabah Umno and Barisan Nasional (BN) are fully behind Musa to continue leading the state,” he insisted when reporters asked him on the FMT article that the chief minister was marking time and could be replaced soon.

Local newspapers here yesterday carried Masidi’s denial prominently but party insiders whom FMT contacted insisted that many in Sabah Umno do not subscribe to the party line that Musa is doing an excellent job.

Said one: “If Musa is doing an excellent job as Masidi claimed, how come leaders like Lajim Ukin and Wilfred Bumburing had left? Please explain too why the Kadazandusuns and Chinese and even more Muslims in Sabah are leaving BN?”

According to the report, an increasingly embattled Umno could well be forced to do a rescue reshuffle in its 'Fix-Deposit' Sabah’s party hierarchy and state leadership.

The rationale for the reshuffle getting the go-ahead from Najib is reportedly due to grumbling among the business community in the state as well as a series of high-profile defections from Umno as well as other BN parties.

According to well-placed sources, the shake-up would involve Musa taking leave and either Masidi or Hajiji Mohd Noor acting as Sabah chief minister until the general election.

However, talk of a shake-up in Sabah Umno is also being seen as a gambit by those close to another Sabah Umno strongman and Musa rival, Shafie Apdal, the current Semporna MP who is a trusted man of Najib, to eventually pave the way for him to helm the state.

This is plausible but Umno insiders are warning of serious repercussions should Najib refuse to reinvigorate the BN in the state which is reportedly steadily losing the support of almost all the communities in the state.

They claimed that party’s interest must be put first and ahead of personal agenda and failure to do so would result in more defections as the election looms.

“The sooner the PM does something, the better we are prepared for the election. Public perception is just as crucial as reality in an election; we cannot afford to carry baggage in a pivotal election like the coming one,” said an Umno leader who requested anonymity.

He said Masidi’s statement was a stock party reply as “there is no way an Umno leader would go ahead and say yes there is truth in the report on Musa”.

“It is better for the party to be courageous than limp into an opposition vicious attacks. Insiders like Lajim and Bumburing could be dishing out damaging information.

“They are already working with Anwar Ibrahim to bring down the party,” said the Umno leader who claimed to be among its founding members in Sabah.

Just before leaving Umno, Lajim hinted that he had informed Najib about the situation in Sabah for the BN and how in his view it was time to replace Musa as chief minister.

The situation in Sabah, according to party insiders, is not unlike that across the border, where there are efforts to replace long-serving Sarawak Chief Minister, Taib Mahmud.

So far, Taib has shown no sign of leaving the scene before the general election.
Posted by sabahkini.net at 11:26