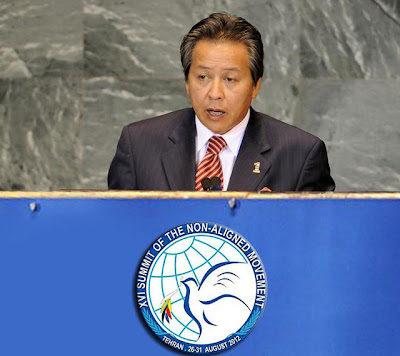 ALLOW me first to congratulate the Islamic Republic of Iran as the new Chair of NAM and also extend our appreciation for the excellent organization of the Preparatory Ministerial Meeting of the Sixteenth NAM Summit. I would also like to express our sincere appreciation to Egypt as the out-going Chair for the exemplary leadership in the past three years.

The world has changed since the birth of NAM and the challenges that we face today are more complex. In today’s international order, we often witness the hypocrisy of powerful States claiming to champion freedom, democracy and good governance but at the same time have been known to behave in the most oppressive manner. We see them arm twisting and bullying small states to their will, all in the name of progress and democracy.

Equality and freedom have commonly been identified as important characteristics of ‘good governance’. These two characteristics can be well argued as outright pre-requisites for peace and security.

At the international level, good governance calls for every sovereign nation to be treated equal before the law and be entitled to equal protection by the law. No country should be discriminated due to its size, historical and cultural background, its system of government, its beliefs and ideals.

The rights and interests of every nation must be upheld and their concerns addressed for lasting international peace and stability. But is this the case?

Therefore, the theme of this interactive debate “Lasting Peace through Joint Global Governance” is timely.

Together, NAM must advocate and lead the way in building an international order based on inclusion, justice, equality, human dignity, understanding and respect for cultural diversity by being more assertive on these principles.

Additionally, these principles should be articulated and practised within the principles of sovereign equality and non-interference in the domestic affairs of states. Has NAM exploited its strength and leveraged on its influence in dealing with issues and challenges confronting the international community?

When we think of joint global governance, we cannot run away from discussing the current efforts to reform the UN and its organs, primarily the General Assembly and the Security Council. We agree that the values and principles of the UN Charter should always be respected and upheld.

However, the failure to arrive at and implement decisions undermines UN’s relevance and effectiveness. Here, I would like to once again highlight what have been said many times before in many international forums that the UN needs urgent reform.

That is why Malaysia will continue to call for comprehensive reforms of the United Nations including the revitalisation of the General Assembly as the chief deliberative, policy-making and representative body.

Equally important are also reforms to the Security Council to reflect the geopolitical realities of the 21st century. The Security Council should ideally be more democratically represented, competent and effective in maintaining international peace and security.

We all agree that the Council needs to be reformed and but we have not agreed on how. Progress will never be made with this difference of opinions. We must find compromise within the different views and articulate positions in areas of convergence that reflects the overarching views and positions of NAM.

Let me cite a few clear examples. For many years, we have been struggling to find solution to the Question of Palestine. Despite no fewer than 200 resolutions by the Security Council and twice as many resolutions by the General Assembly, the Palestinian issue remains unresolved.

This is a glaring display of UN’s weaknesses and a clear call for addressing this paralysis. Another example is Syria where we see the inability of the Permanent Members of the Security Council to find a just solution to the senseless and unceasing violence there.

It has been seven decades since the adoption of the Universal Declaration of Human Rights (UDHR) and we have seen vast developments in this area since then. The UDHR is not intended to exhibit a particular point of view of any one people or group of peoples or any particular political or philosophical system. Human rights should not be applied in a vacuum and Article 29 (1) of UDHR demonstrates this.

Global governance in human rights has evolved with numerous treaties on human rights and treaty bodies. Although there are basic elements that the world needs to agree on, the way of addressing any human rights issue, from one country to another, should be different due to unique sovereign differences in culture and religion and this is where sensitivity is needed when dealing with human rights across borders.

Additionally, we must not allow human rights to be used as a tool to impose one’s values over others, destabilize and interfere in other countries’ internal affairs. Politicisation, selectivity and double standards should be eliminated from the international processes involving the issue of human rights.

I believe NAM can relate to this due to the diversity of its members and I stress that we must learn to respect and accept each other’s values and differences in the context of human rights.

Global governance does not only concern itself with geopolitical realities but also geo-economics. The Euro debt and the sub-prime crises have taken a tremendous toll on the world’s economy especially their impact on developing countries.

These problems exist because of structural problems in the economy of developed countries marked by the lack of proper corporate governance and sovereign financial mismanagement. Isn’t it unfair that many are made to suffer by the action of the irresponsible and excessive few?

These crises have once again demonstrated to us the ineffectiveness of the Bretton-Woods system with institutions created to cater for global economic situations nearly 60 years ago. Malaysia calls for reforms of such international financial institutions, particularly, their decision-making process.

There is an undeniable need for comprehensive, substantive and structural reforms. Malaysia also supports the call for equitable participation and representation of developing countries in the decisions made by international financial and monetary institutions.

Before I end, allow me to reiterate that in these changing times, NAM will continue to face new and complex challenges. Staring at these new realities, NAM members have no other options but to come and work together as a single and cohesive entity with collective understanding and cooperation.

These would ensure the resilience, strength, relevance and effectiveness of our Movement in addressing these kinds of challenges.    I am certain that we can jointly strive towards achieving lasting peace.

Let me end now by thanking you for the excellent arrangement and assure you the full cooperation of my delegation in ensuring the success of our deliberations here.  We look forward to working with the Islamic Republic of Iran as Chair of our Movement in a host of important issues.