SPNB HOUSING IN KINARUT NOT FINISHED 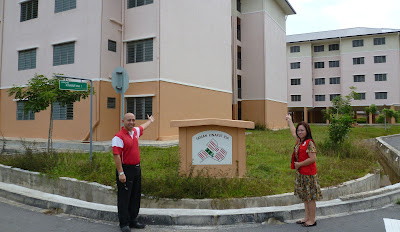 THE PEOPLE in Kinarut near Kota Kinabalu City complained to the Sabah DAP Wanita Chief Puan Noriah Onong concerning the housing project here, Taman Kinarut Ria, which has not been completed.

The people already fed up with the many years of frustrated wait. They have been looking at the empty flats here for years, and just don’t know when exactly they can move in. This project looks having difficulty, and it seems that their wait is going to prolong.

Puan Onong was accompanied by the KK MP Hiew King Cheu and his Special assistant Andrew Lee Chee Kiong to inspect the SPNB flats in Kinarut and found that the many blocks of flats comprising of 725 units of low and medium cost flats is practically completed.

The reason on why the flats are still not allowed for occupancy is unknown. According to a few workers who are doing the maintenance and security work said they also don’t know what is happening. Their work is to clean or repair minor defects on the building.

Puan Onong said it is a pity that the 725 units of flats here cannot be allowed for occupancy. The nearby kampongs folks who wish to move in to their flats here had been suffering, and have to continue to stay in the wooden house in the kampongs. Their living condition cannot be improved due to the delay and they are not happy at all.

SPNB must explain all the reasons related to each of the project in Sabah, so that the buyers or the people who rent the units can have the details and make future planning. They demand the SPNB to immediately get the housing ready for them to move in without any further delay. They said the election is getting very close now, and they shall have to make up their mind on who to vote later.

The promises of “a roof for everyone” are empty promises by the BN, and all these didn’t being fulfilled.