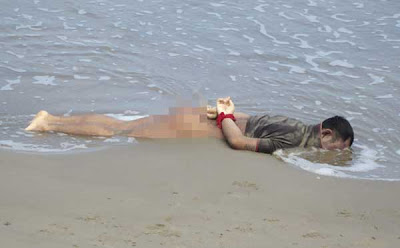 GRUESOME FIND.... The body lying face-down on the beach.

MIRI: A semi-nude man believed to be a murder victim was found at the beach near Sri Bima Maritime Training Centre at Kampung Batu Satu near here about 8.30am yesterday.

The gruesome discovery was made by a group of boys playing football near the beach. The boys then reported their finding to a man who was sending someone working in the area, who then relayed the message to workers of an oil and gas plant and then the police.

Police chief ACP Mun Kock Keong, meanwhile, said the case was being investigated under Section 302 of the Penal Code.

The dead man was clad in black T-shirt lying face down with both hands tied behind his back. Stab wounds and blood clots would found on the body and on the sand.

“We believe that the 30-something victim is Malaysian based on the BCG mark found on the body,” Mun told reporters here yesterday, adding that the man was about 5’ 2” tall and that no documents were found on him. 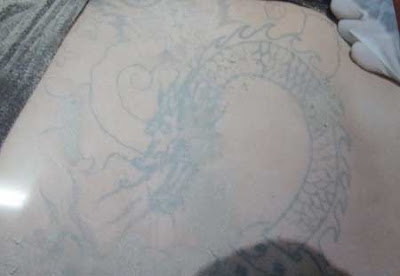 “The victim, who could have been murdered 24 hours earlier, had a tattoo of a dragon on his back, a tattoo of a flower on his left hand and the symbol of Ying Yang on his back on his right hand.

“I hope that his family can come forward to identify him at the Miri Hospital mortuary.”

Those with information may come to the police station here or call the investigating officer ASP Zainan Azali Abdul Latif at 01112099878.

On another matter, Mun said two pathologists were now here to conduct a post mortem on the body of a suspect who died during police investigation and the Kuala Baram murder victim. (theborneopost)