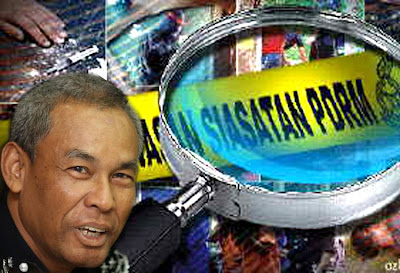 SPECULATION .....Failure to address the allegation will lead to public speculation, said Musa.

KUALA LUMPUR : Former Inspector-General of Police (IGP) Tan Sri Musa Hassan wants Putrajaya to review its crime statistics or disprove allegations that its official records were manipulated to dress up the police’s success rate amid public scrutiny over security.

The former police chief said the move was necessary to help blunt public anxiety over a perceived spike in the crime rate despite the government’s initiatives to make the country safer.

Yesterday, the police responded to the allegation that was aired last week in a letter purportedly from a serving police officer.

“It’s better for the government to review the crime rate statistic. If it is inaccurate as alleged, prove it. Don’t just keep quiet because this will pave the way for people to speculate,” he told The Malaysian Insider yesterday.

On August 22, an anonymous letter, purportedly written by a policeman who penned his name as “Sumun Osram”, had alleged that crime cases were being methodically manipulated into “non-index” offences that were not registered as part of official statistics presented by Putrajaya’s efficiency unit PEMANDU.

In Malaysia, the police divide crime into two categories, index and non-index — the former defines crime that is reported with sufficient regularity and significance to be meaningful to score an index for crime situation in the country while the latter is regarded as minor in nature.

Musa confirmed that the police did indeed classify crime incidents into the two classes as alleged.

“It’s true we classify crime into index and non-index,” he said, referring to the police force.

“This is the guideline from Interpol,” he added, referring to the International Criminal Police Organisation by its abbreviated name. The global agency works to fight crime across borders among its 190 member nations.

Musa, who has served in the Royal Malaysia Police (PDRM) for over four decades, has previously accused the authorities of masking figures from the public over the country’s crime rate and claimed that public security has now reached a “worrying stage”.

The country’s No. 1 watchman for four years ― from 2006 before he was succeeded by Tan Sri Ismail Omar on September 13, 2010 ― lent his weight to back calls from opposition lawmakers who want Putrajaya to come clean on allegations that government agencies have been manipulating official statistics to paint a false picture of the crime rate and give a glowing image of the police force’s achievements.

Despite repeated calls for clarification, PEMANDU and the police have kept silent until yesterday.

“All reported crimes, regardless of which Penal Code sections or category of crimes they come under, WILL contribute to the crime statistics. And this will be further enhanced by the Online Report Tracking System under Beta testing at the moment and due for launch late 2012.

“The achievements of PDRM and improvements by way of the NKRA are real, as are its initiatives, such as Omnipresence, Safe City Programme, Investigation Enhancement, Frontline Servicing,” ACP Ramli Mohamed Yoosuf from Bukit Aman’s public relations department said in a statement.

“Definitions of Index and Non-Index Crimes, as well as the Investigation and Prosecution processes have been instituted long before the introduction of the NKRA programme. There is no factual basis or evidence to the allegation that crime statistics is manipulated or ‘doctored’.

He was referring to the ‘Sumun Osram’ allegations.

“The writer, if indeed a police personnel, has not been long in the force, has clearly no understanding on how policing processes and crime investigations are conducted. To avoid doubts and misunderstanding due to misrepresentation as demonstrated by the writer, PDRM would like to gracefully extend an invitation to any member of the public an opportunity to come forward and share their concerns with us,” Ramli said.

Last month, PEMANDU defended itself from public criticism following a spate of crime incidents that seemed to contradict the image painted by its crime statistics.

The agency, along with the police and Home Ministry, has continued to stand by its claim that the country’s crime rate has dipped considerably since initiatives under the Government Transformation Programme (GTP) were put in place two years ago.

PEMANDU’s crime reduction NKRA (national key results areas) director Eugene Teh had in July released fresh statistics to show that index crime in Malaysia dropped by 10.1 per cent from January to May this year compared to the same period last year.

The agency had earlier released figures to show that index crime had dropped by 11.1 per cent from 2010 to last year while street crime dipped 39.7 per cent in the same period.