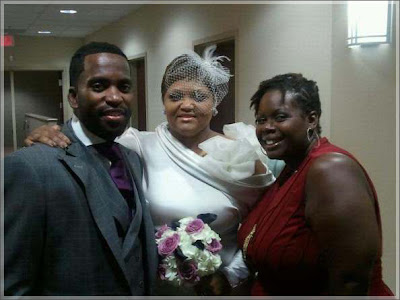 PASTOR Craig Lamar Davis looks like any other healthy, happy, heterosexual pastor with good family values.  He was once a preacher at the Full Gospel Baptist Church in Atlanta and a pillar of leadership in the community.  Also, like a lot of men at the front of the church, the pastor had a thing for the ladies.

Another thing you might want to know about Davis, according to authorities, is that the pastor is HIV positive.  He also didn’t seem to care who else became HIV positive after he slept with them.

The pastor was arrested for reckless conduct after police found that he was sleeping with several women with whom he was not married.  A woman by the name of Ronita McAfee says that she met the pastor on Facebook and began sleeping with him.

Ronita says that she became concerned when one of the pastor’s ex-girlfriends called to say that she had HIV.  She claims that the pastor then counseled her (presumably leaning on the word of the good “lawud”) and told her to get tested.   McAfee then says that she believed that, based on her observations, the pastor himself was not interested in getting treatment or changing his sexual behavior, in spite of his status.  This is what prompted her to seek out a warrant for his arrest.

Ronita is, by our best guess, the first person to file for the arrest of someone who was found to be having unprotected sex in Clayton County, GA while knowing that he is HIV-positive.  McAfee says that when the investigation began, another woman in the church leadership stepped forward with her confession about interacting with Davis.  The woman even claimed that she’d been celibate for 15 years before meeting him.  She too is HIV positive.

Ladies, please take a good look at this man, because the fact is that you probably know him.  He’s the nice, smooth, good-looking man that makes you want to get naked on the third or fourth date.

You trust him because you’ve been raised to believe that a man of God would never hurt you.  In fact, he might be the man that your church has had you waiting for because he is well-grounded in the Christian faith and knows all the religious buzzwords (“I’m saved,” “in the blood,” “God’s favor,” etc.).

He can easily get into your head, because he knows that one defining characteristic of nearly every black woman in America is her deep and unshakable commitment to the church – in fact, the personality traits that make for a good pastor also happen to be the same ones that make for an exceptionally gifted pimp (although not all pastors are pimps).

As a man who’s written extensively about other sad creatures like Bishop Eddie Long (who also hails from Atlanta, aka the bible-thumping Sodom and Gomorrah), I find Pastor Davis’ case remarkable for several reasons:

First, the courage of these women to step out and publicly reveal the pastor’s deception has saved lives.  I wish there were a day where every 30 and 40-something year old black woman who has caught HIV, Herpes, Syphilis or some other disease would speak out about what happened to them, so that younger women don’t end up falling into the same trap.

Countless women have died from catching something that their man brought home to them after fulfilling his “interpersonal needs” someplace else. Unfortunately, the relentless shame thrust upon “the good Christian girl” with a venereal disease keeps many of these stories from ever being told.

Also, modern feminist thought sometimes leads women to think that it’s OK to run through as many sex partners as the very worst of men.  Many of these women end up paying a significant price for this mentality.

Secondly, the pastor’s denial of his condition and unwillingness to go to the doctor is quite common.  Many women are accustomed to getting regular STD screenings as part of their annual checkup.  Men are not raised in the same way.  There are men I know who sleep with literally dozens of women every single year and haven’t been to the doctor since MC Hammer had a hit record.

Even worse, many women don’t ask and certainly don’t confirm the man’s HIV status as much as they check the size of his bank account or the magnitude of his “swag” factor.  The fact is that if you think he’s got swag, then a lot of other women do too.

Men like Pastor Davis are allowed to prey on unsuspecting women for at least three reasons:

1) Many women value style over substance – if you look good, then you must be good.   I am amazed at how superficial traits are valued more than more meaningful factors, like the content of a man’s character.  Mind you, men make the same mistake, since they falsely believe that when a pretty girl offers you sex, you’re supposed to take it.

2) Many women falsely believe that men who go to church are better than men who don’t.  Bishop Eddie Long should help you to know better than that.  Unfortunately, people consider each case of a pastor doing dirt to be an exception to the rule, without realizing that there are men like Davis all over the country.  Davis is not the man you need to fear;  actually, you need to fear all the Craig Davises that you still don’t know about.

3) Many women don’t ask questions and will gladly sleep with a handsome playboy without checking and confirming his STD status.  If he doesn’t mention the other women he slept with before he came to her house, it’s as if those women don’t even exist. Even worse is that the fixation on HIV leads us to forget about how many women have had their wombs corrupted from  all the other STDs that you can get besides HIV.  Many people will brag about having a negative HIV test, but won’t get a full STD screening from the doctor – a researcher in Philadelphia told me that he randomly tested 20 men in an inner city barbershop and found that over half of them had Chlamydia.

What’s the result of the aforementioned factors all coming together, conjoined with intense denial in the black church and a commercialized hip-hop culture where both men and women glorify female degradation and irresponsible hyper-sexuality?  An HIV explosion like you would not believe.

So, every time you hear about folks going from one short relationship to the next or the man with five babies with four different women, just remember that, while all this is happening, viruses, germs and bacteria are being shared with every romantic interaction.  Even worse, because the men aren’t getting their reality checks from the doctor, it’s all “out of sight, out of mind” as fancy clothes, exciting parties and bottles of Chirac cover up the epidemic occurring behind closed doors.

Take a note from the lessons of these women and realize that another Pastor Davis likely lives in your own community.  But also note that the Pastor Davis-types of the world are allowed to do their dirty work because all of us continue to empower and excuse the devilish snakes in the pulpit.  A person can do all the evil he wants in the world, and as long as he asks for God’s forgiveness in public (providing no further confirmation that his behavior has changed), we invite him right back into the church and pretend like it never happened.  Just go ask R. Kelly.

Dr. Boyce Watkins is the founder of the Your Black World Coalition. To have Dr. Boyce commentary delivered to your email, please click here. To check out Dr. Watkins in the Janks Morton Film, Hoodwinked, please visit this link.
Posted by sabahkini.net at 10:04