SORRY SEEMS TO BE THE EASIEST WORD 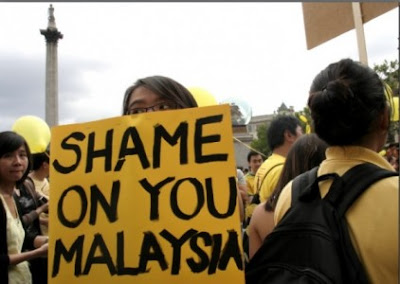 LOOKS like you don’t have to be an athlete with a bright future to get away with statutory rape. You can just be a high-school dropout and electrician, say your sorry and escape prison time. The Facebook and Twitter channels are filled with angry netizens attacking the court decision to let Chuah Guan Jiu, 22, get off with a RM25,000 bond and a proverbial slap on the wrist.

This comes right on the heels after the equally controversial decision for ex-national youth squad bowler Noor Afizal Afizan to be bound over RM25,000 because the court decided he had a bright future.

These angry netizens includes some very prominent personalities. Actress Ida Nerina told Daily Chilli, "It’s disgusting that the judges are doing this. Why? Has the electrician got a bright future too? To do what? Fix light bulbs?"

Ida is not amused that "young" was actually a consideration. She says, "He (Chuah) is 22! She’s 12! It’s hard to stop carnal desires but he should know better. There is no excuse.

I was livid when I read the news," says the 48-year-old actress. Ida was so livid that she posted on her Facebook fan page. "SHAME ON U MALAYSIA! Another statutory rape. rapist not jailed. WTH is becoming of us?! this is SO HORRIBLE! She was 12!"

Comedian and emcee Afdlin Shauki, 41, a father of three girls, says, "It doesn’t send a clear message to people having sex with minors. Two similar court decisions are not good and very worrying, especially as a father of three daughers," he says.

Afdlin said, "The victim is so young and is not of the right mind to consent. The law is there to protect any sex between a minor and an adult.. If he (Chuah) is sorry for what he’s done, he should be sorry in jail!"

Comedian and emcee Harith Iskandar, 45, who just became a daddy to a baby boy in May, shared his anger and disbelief, saying that the law is meant to protect the victim but is failing miserably to do so. "There is no deterrent whatsoever. Someone I know said sarcastically that you can get a harsher sentence for khalwat!" he said.

Celebrities weren’t the only ones raging against the judicial machine. Public Relations practitioner Syed Mohd Idid, who is also a father of two boys and twin girls, questioned the intentions of Chuah.

He posted on his Facebook. "AWW C'MON from this para (in The Star report) , we all know his intention was NO GOOD," he says. The paragraph from The Star report that Syed was referring to reads “DPP Lim Cheah Yit said Chuah had coaxed the girl into skipping school and following him back to his flat on the pretext of him being sick.”

Syed continues, “They were dating and the accused should have protected her but he took advantage of her instead.”