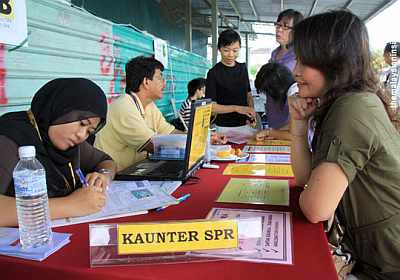 LIBERTIES.....A vote for Pakatan Rakyat is a vote for PAS, which could spell an end to personal liberties, says the Malaysian Youth Rights Movement.

PETALING JAYA: A youth group is urging Malaysians not to vote for Pakatan Rakyat during the next general election as it claims that PAS, which is a member of the opposition pact, will endanger non-Muslims’ personal liberties.

Its president Shen Yee Aun pointed out that not only was swim wear optional, the emcee for the “Wet and Mad Wednesday” party had also announced that Muslim women should refrain from wearing outfits deemed inappropriate to the Muslim faith.

“The pool party had a dress code stating ‘stylish, sexy, trendy and tasteful swim wear allowed”, but swim wear was not a requirement – participants could choose what to wear and whether to enter the pool or not,” Shen said in a statement.

“The event is basically just a pool party. It is out of line for PAS to even bring up things like prostitution, abortion, abandoning babies while condemning the event, all because of an event at a licensed entertainment outlet that caters to people of legal age.”

Shen said that PAS’ reaction to the event was just another addition to the Islamist party’s “dangerous track record” of encroaching on non-Muslim’s lives – a record that he claimed included attempts to ban Valentine’s day celebrations in Malaysia, the segregation of men and women in Kelantan, as well as the banning of bikinis in Terengganu and Kelantan.

“Malaysia has long enjoyed freedom – be it dress code and fashion, or even choices of lifestyle and entertainment. However in the states that PAS has held power for a long time, the freedom to dress and even mingle with others is severely restricted,” he said.

He said that the group was not alone in questioning PAS’ restrictions, pointing out a New Straits Times article in July which quoted 20-year-olds’ unhappiness that unmarried couples were banned from sitting side by side in Kuala Selangor’s sole cinema.

But the ruling was revoked within the same month, with Shah Alam MP Khalid Samad telling reporters that the enforcement was very unlikely to be implemented in the future.

Shen also flayed DAP and PKR for remaining silent on the issue and “failing to stand up for the rights of the youth, women and non-Muslim community in Malaysia”.

“We sincerely urge all Malaysian youth, women and non-Muslim community to vote against Pakatan Rakyat in the upcoming general election unless they clarify their stand,” he said.

“Pakatan continues to manipulate the public that hudud law is only for Muslims and non-Muslims will not be affected, but they have shown their intent by speaking out against a simple pool party,” he added.

He also said that the group would launch a campaign to “enlighten all Malaysian youths regarding the danger to personal liberties if they were to vote Pakatan into power”.