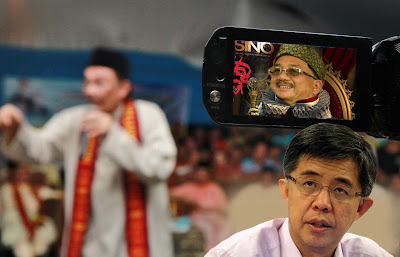 KUALA LUMPUR : The Federal Opposition Pakatan Rakyat (PR) yesterday said that it is clearly against the practice of party hopping, where politicians shift their political allegiances after being elected.

“We disagree with party hopping, that is very clear. Pakatan never encourages people hopping from the mandate,” said PKR vice-president Chua Tian Chang (picture) in a press conference after a PR secretariat meeting.

“What is the best way to do it (prevent party-hopping), we will discuss,” Chua said, but added that “we are not talking about party-changing as such, but we are talking about bribery...”

He was responding to questions on whether PR will push for a nationwide anti-hopping law for politicians.

“It is very different from what has happened lately where people say they are no longer confident with BN, (and that) they want to work with Pakatan,” Chua said.

“That is not party-hopping, they do not hop because they have a position or...because they get payment from anybody,”

In an apparent reference to the Sabah lawmakers, he said, “They said very clearly they would not contest under BN again in the next elections. The mandate is back to the people.

“There is no undermining of basic democratic principles when you derive a mandate from the votes of the people.”

Penang Chief Minister Lim Guan Eng, who is also DAP secretary-general, recently said that his administration is planning to enact anti-hopping laws in the state.(TMI)
Posted by sabahkini.net at 14:30