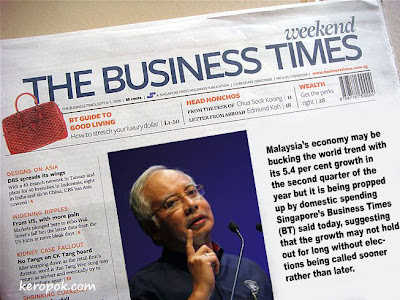 KUALA LUMPUR : Malaysia’s economy may be bucking the world trend with its 5.4 per cent growth in the second quarter of the year but it is being propped up by domestic spending, Singapore’s Business Times (BT) said today, suggesting that the growth may not hold out for long without elections being called sooner rather than later.

The business paper noted that Southeast Asia’s third biggest economy had had outstripped its neighbours in the second quarter, but that the growth was due to domestic demand, which rose by a whopping 13.8 per cent compared to 9.7 per cent in the first three months of this year.

All sectors had benefited from Najib’s “giveaway” programme, the paper said, as the citizens were spending.

But the paper warned that Najib was taking a “risky bet as the rating agencies have been breathing down his neck”.

It noted that Bank Negara continues to expect the strong domestic demand to drive the country’s economic growth even as it noted “downside risks emanating from external developments remain”.

The Singapore business paper said that it would be better for Najib to call for elections sooner rather than wait for his BN government’s mandate to expire next April.

“But most people are tired of the incessant politicking.

“Perhaps the premier should wait no longer and call the general election sooner rather than later,” it said, suggesting that Malaysia’s growth may not hold out until next year.
Posted by sabahkini.net at 12:05