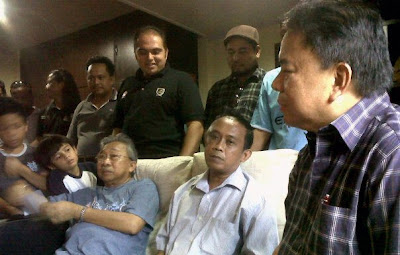 "However, the party would accept whoever is chosen by the Umno President and Prime Minister, Datuk Seri Najib Tun Razak," he said.

Yunus said Raja Nong had made it clear that he would stand in Lembah Pantai and not in Labuan.

He said as Acting Umno Chief, he would be writing a confidential report to the Prime Minister and the division was also in touch with Secretary-General Datuk Tengku Adnan Tengku Mansor regarding the position of Labuan Member of Parliament, Datuk Haji Yussof Mahal.

Regarding the bankruptcy case of MP Yussof, Yunus said so far the national leadership had not stated anything on the issue due to the Puasa and Raya occasion.

On the coming general election, Yunus said both BN and Umno were working hard to win. He said besides the support of component parties of BN, Umno also had the support of local NGOs.

He said the administration of Umno was going on smoothly and unaffected by the latest development.

He said the party had rules and ethics "and we all speak with one voice."

"What is important is for me to win the elections and not be fooled by the promises of Pakatan Rakyat," added Yunus.

On Yussof's position as Chairman of LC, he said t was for the Secretary-General to decide.

He said that decision making process of LC was not affected and LC's Chairman made the day-to-day decisions while other policy matters were referred to the Ministry.

Labuan has been an Umno stronghold since the first parliamentary elections were held in 1986 to Datuk Mulek Awang Damit who later joined Umno and served three terms followed by Datuk Suhaili Abdul Rahman serving two terms. Yussof is the third Umno MP of Labuan.