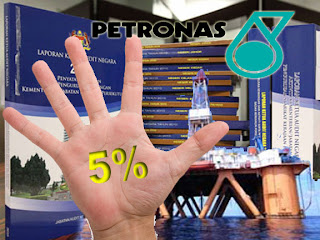 FOR DECADES, the oppositions had been clamoring in parliament, the states assemblies and in many campaigns about the petroleum royalties’ issues and each time the issue was shot down. Until the recent announcement, it remained like a taboo.

PM Datuk Sri Najib woke up one morning in early August 2012 announcing that a special committee be set up to study the petroleum royalty payments involving the eastern states of Peninsula Malaysia, in a fair and transparent manner!

Then on Monday 20 August 2012 night, Sarawak CM Tan Sri Abdul Taib Mahmud was quoted as saying the State Government would discuss the need to review the 5 per cent petroleum royalty paid to Sarawak with the Federal Government. Admitting that State Government and opposition leaders in the State have reached a consensus on the issue, Taib said both parties needed to meet and discuss the matter.

Subsequently, in an announcement, Sabah CM Datuk Seri Musa Aman believed that the State’s 5 per cent petroleum royalty issue is open for amicable discussions with the Federal Government.

Musa, in saying that the good relationship between the State and Federal governments will benefit the Sabahans through large allocations which will help propel the State forward. And he believed that this issue is now opened for discussion and what’s important is that they will scrutinize the matter and reach the best decision for the mutual benefit of all concerned.

Suddenly, Dr Herman Luping comes up some stories of his own about the petroleum royalty saying a 5 per cent royalty of roughly about RM100 million a year (?) for Sabah. In the first place, what does 5 per cent represent without proper accounting and production records being openly revealed?

You don’t need a genius to make simple earning calculations from the daily metering records of incoming oil and gas from production fields to tank farms and outgoing to export sales. He quoted that 30 per cent (not, 20 per cent being requested by the opposition) was the royalty figure stated by the Chief Ministers of Sarawak and Sabah at that time of discussions in the 1970’s. So, what is so complicated if it is really fair and transparent?

There are four states in Malaysia that produce oil and gas, namely, Sarawak, Sabah, Terengganu and Kelantan - Sarawak being the first to produce oil since 1910 followed by Sabah. Petronas was established by the Petroleum Act 1974. The Petroleum Act ended Shell’s monopoly of the Sarawak and Sabah petroleum fields that resulted in a mass retrenchment of workers and demolished a small refinery in Miri, Sarawak.

The issue of petroleum royalty in Terengganu was stopped in 1999 after Terengganu fell to PAS at the time of the premiership of Tun Mahathir. Instead of paying royalties, the funds were instead channelled through what was called “wang ehsan” or goodwill payments which opposition leaders, and, some BN politicians claimed were abused for wasteful projects.

The case dragged on up to 2009 but by then the state had already fallen to BN again and Putrajaya then decided to reinstate the royalty payments to the state. At one stage in 2008, the “wang ehsan” issue was hotly debated during the time of former PM Tun Abdullah A. Badawi.

What really happened after that is until today unknown and conveniently forgotten until PM Najib suddenly came up with the idea to open the petroleum royalty issue for the east coast states.

The big tussle over whether Kelantan should be paid oil royalty is yet another example of politicians childishness in their public discussion of issues. Instead of laying out the facts and law objectively and comprehensively, our politicians seem more focused on outdoing each other, leaving the public in a haze of rhetoric and factional discourse.

There is no oil refinery in Sarawak or Sabah despite being two of the four oil and gas producing states. For many years now Sarawak and Sabah depended on refined petroleum products from West Malaysia. Crude oil (Miri and Tapis light) and gas of the top qualities in the world are exported directly overseas.

Malacca and Negeri Sembilan (non-petroleum producing states) have refineries that supply some of the refined petroleum products we consume daily. While our high grade crude oil is being exported, the lower quality higher sulphur content Middle East crude is refined for our local consumption.

With this sudden change of heart by the PM, what will be fair and transparent? In the first place, the announcement was made involving the eastern states of Peninsula Malaysia. That is why, the CMs of Sarawak and Sabah jump in so as not to be just shelved aside and left behind in the study and discussions. Or is this just an election announcement for Kelantan and Terengganu? “Catch 22” either where the PM has to proceed since he made the announcement!

Everybody is happy with the announcement and is waiting for the result of the six months given for the special committee to study the issue before submitting its proposal to the Federal Government. The Sarawak and Sabah state Barisan National component parties have all agreed to the idea and so have all the opposition parties that have been clamoring for a fair share of the petroleum returns and royalties. The question is, “what are the basis of the petroleum returns and royalties?”

So, watch out our fellow East Malaysian and see “what is in the bag” for us. “The birds are in your hands”, and you will decide if the Federal Government decision is just, fair and transparent. The PRU13 is just around the corner! Is 55 years enough for the BN or do you want to give the opposition what Tun Mahathir called a “5 years trail mandate” and petroleum royalty is one of the major issues for Sabah and Sarawak amongst others?