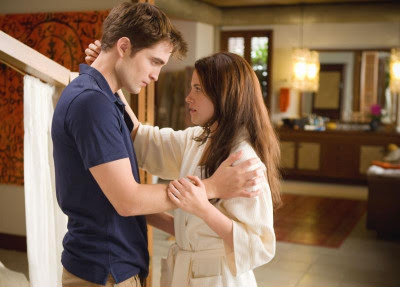 THE BLOW-UP between Robert Pattinson and Kristen Stewart is bringing more bad news for Twihards. The former on- and off-screen couple will not attend the final four Twilight conventions.

Creation Entertainment said that the pair, along with Twilight star Taylor Lautner, would not be part of upcoming shows in Detroit, New Jersey and LA between now and November.

Creation's statement said in part: "Although Rob, Kristen and Taylor will not be with us this time out we will have a super line-up of other Twilight stars and the weekend will be filled with special events."

The four Twilight movies in which the two have starred have grossed more than US$1 billion at the worldwide box-office for Summit Entertainment. The next movie in the franchise, The Twilight Saga: Breaking Dawn (Part 2), will be released on 16th November.

Rob and Kristen's troubles came to light after she disclosed her infidelities with married British director Rupert Sanders, with whom she worked on Snow White And The Huntsman.

"My Biggest Problem … I Didn't Hire A Publicist"

In the meantime, Rob has emerged from his recent self-imposed exile to promote his new movie Cosmopolis, stepping out in New York in his first public appearances since Kristen admitted cheating on him and issued a public apology.

As expected, the break-up is getting just as much attention as Cosmopolis, if far fewer answers.

For the British actor, who became one of Hollywood's highest earning actors and biggest heartthrobs, his new role may be the greatest test yet of whether he can carry over his young vampire romance fans to the R-rated indie film.

Asked how he was coping, Rob told Reuters at a press event for the movie: "There is this whole thing about wanting to know more and more about celebrities. But really, all that everyone wants to do, is they want them to be celebrities again. However ridiculous that is to say, no one really wants to know." 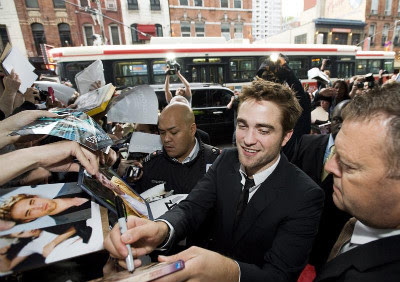 And in giggly interviews with The Daily Show and Good Morning America, Rob repeatedly dodged the topic that made world headlines and shocked millions of Twilight fans.

During his interview with Jon Stewart over tubs of Ben & Jerry's ice cream, Rob awkwardly tried to deflect questions about his issues with Kristen. He never mentioned Kristen by name and never alluded to the cheating scandal, but he acknowledged one mistake.

"My biggest problem in my life is I'm cheap and I didn't hire a publicist," Rob said.

He told Good Morning America, "I've never been interested in trying to sell my personal life and that's really the only reason people bring it up. The reason you go on to TV is to promote movies. That's the only way to do it."

Rob went on to describe his life as "like being on the craziest theme park ride".

"In A Lot Of Ways My Life Got Smaller"

That isn't far off the surreal scenario of Cosmopolis, in which Rob plays the all-knowing Eric Packer. In David Cronenberg's philosophical new movie, Packer is a young, emotionless, obscenely rich financial visionary who rides around New York in a limousine as he slowly becomes unravelled.

Packer shoots off enigmatic lines such as "life is too contemporary" straight from Don DeLillo's 2003 book of the same name in a story that has been interpreted as a warning against the dominance of capitalism and technology in society.

Rob, who Cronenberg said was in part chosen for his "star power" to help gain financing for the movie, says his performance, like previous ones, is influenced by events in his real life.

"Every film I did, thinking about it now, no matter what the character is, is just what you were at that time and how you interpret it," Rob told Reuters.

"I think every one of the Twilight movies is kind of different. It's not the same character in every one. But obviously, like, once your life suddenly changes—in a lot of ways my life got a lot smaller—after I got famous. And so all the characters, every movie I did, has got bits and pieces of that."

Rob hopes Twilight fans will crossover to see Cosmopolis, which was made on a small US$18 million budget.

"I don't think people realise that the Twilight audience is actually older. There are not very many who are even under 18," he said. "Hopefully, they will be the ones who like it." (Reuters)