NOT FALSE HOPES IF 20-POINTS ENFORCED 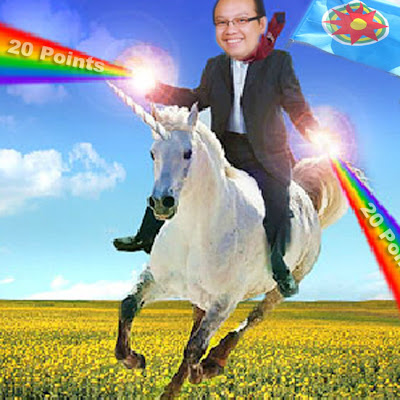 “THE reason advanced by Keningau Umno Youth regarding the struggle for the 20-Points is creating “false hopes” for the people especially the bumiputra communities in Sabah clearly reinforce STAR Sabah’s stand that outside parties like Umno cannot best defend Sabah’s rights” said Dr. Nicholas James Guntobon, Deputy Chairman of STAR Sabah and chief of the Interior Zone in response to the statement by Keningau Youth Chief in the papers yesterday.

“If we study properly the 20-Points, the Cobbold Commission Report, the Inter-Governmental Committee (IGC) Report, the Malaysia Agreement and the other documents culminating in the formation of Malaysia, we can see the vision, foresight and intellect of our founding forefathers in defending Sabah’s rights in the merger to form Malaysia” added Dr. Nicholas.

Despite the lack of experience and education, these forefathers did not lack intellectual ability and were able to formulate constitutional safeguards for the future of Sabah and its future generations.

Despite being better educated, some even in law, it will be sad for Sabah’s future if current leaders  cannot see how Sabah’s rights are protected in the 20-Points and the other documents as envisaged by our Sabah forefathers.

It has to be remembered that the surveys conducted by the Cobbold Commission only showed that roughly 1/3 of the people in Sabah were agreeable to the merger of Sabah with Malaya, Singapore and Sarawak to form Malaysia.

Merits in the 20-Points and Malaysia Agreement

Sabah leaders need to study in-depth and understand the entirety of the entire process and documents involved leading up to the Malaysia Agreement and the formation of Malaysia on 16th September 1963 and not just refer to the 20-Points or the Cobbold Commission Report in isolation.

If the 20-Points had been complied with or enforced together with Article VIII of the Malaysia Agreement, Sabah would have been autonomous, united and progressive today instead of being the poorest State, over-whelmed by illegal immigrants with the right to vote, insecure and unsafe and losing its autonomy and political franchise.

If immigration under Point 6 had been strictly enforced, we would not have a huge influx of illegal immigrants and made worse by them being granted the right to vote and to determine the future of genuine Sabahans. Security and social problems would not have been problems today.

If borneonisation under Point 8 had been implemented, Sabahans would have had control of their own public service instead of being overrun by outsiders.   It is not just the loss of job opportunities or positions but Sabahans have lost more than 2 generations of human capital development due to their rightful positions being taken by outsiders.

This loss of human capital development have stunted the growth and development of Sabahans.   In addition, the lack of local knowledge of these outsiders have had a negative effect on the public administration and service to Sabahans.
Sabah should have control of its own finance, development funds and tariffs under Point 11.  In 2011 alone, out of a total of RM109 billion, a total of RM22.7 billion or 20.8% in federal taxes and revenue was collected from Sabah.  This sum excludes oil revenue and other forms of collections collected by other federal agencies like immigration which is targeted to collect RM200 million in 2012.   Lately, the federal government is also intending to extend the Registration of Businesses Act  to Sabah and with this extension, local authorities will no longer collect the trading licence fees and lose their right to approve trading licences.
Under Point 12, the special position of the indigenous races in Sabah, be they be KDM, Bajau, Suluk, Sungai, Bruneian, Rungus, Kedayan and so forth were supposed to be entrenched and enjoy special rights to those enjoyed by the Malays in Malaya.   One only need to ask oneself whether this had been fully implemented or the indigenous races have been marginalized and down-trodden?

Under Point 15, if the education system had been maintained until today and under State control, Sabahans today would have been towering over others in Malaysia instead of being downgraded to manual labour in the industrial factories in the Peninsular.

Under Point 16, the federal government had failed to safeguard the constitutional safeguards that were supposed to be guaranteed for Sabah.   Instead, as a result of various constitutional amendments, the rights of Sabah had been trampled upon.   A very good example is the loss of Sabah’s oil and gas to Petronas with Sabah getting a meager 5% for all its oil wealth.  As reported by the Chief Minister, Sabah’s 5% is expected to amount to RM775.46 million which translates to Petronas getting RM14.734 billion from Sabah’s oil in 2012.
Under Point 17, a constitutional safeguard was to put in place for representation in the federal government.   In 1963, Malaya was only to get 65% of the parliament seats but today it has 75% of the 222-seats.    Sabah’s voice in Parliament is worsened with the Malayan-based parties like Umno coming and taking control of the seats in Sabah further diluting Sabah’s rights.   The problem is further compounded when the local representatives of the Malayan-based parties lose sight of their obligation to safeguard Sabah’s rights and sovereignty and instead follow the agenda of their party and their leaders in the Peninsular.

It is this loss or subjudication of Sabah’s agenda that makes Malayan-based parties like Sabah Umno being unable to best defend Sabah’s rights and autonomy.

By now, it should be very clear that there are no false hopes in the 20-Points or the position of Sabah as an equal partner in the formation of Malaysia.  Rather, the enforcement or compliance of the 20-Points and Article VIII will bring about wholesale upliftment for Sabah and its people.

The Sabah Umno leaders especially the youth leaders should emulate the opposition and champion the cause for the restoration of Sabah’s rights and autonomy under the 20-Points and the Malaysia Agreement and as an equal partner in Malaysia.  The time has come for them to stop treating them as fixed deposits but treat Sabahans and Sarawakians with respect and dignity and not alienate the two territories any further.