STOP IMPOSING AND FOOLING THE PEOPLE 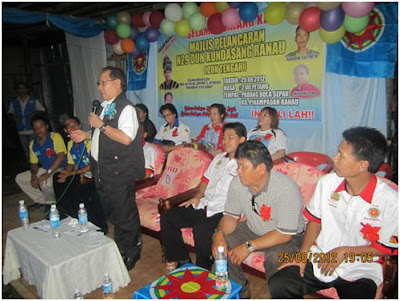 “MALAYA (in the name of the Federal Government) should stop imposing its will on the people of Sabah and Sarawak and fooling them to celebrate Malayan independence 55 years ago and calling it Malaysian independence,” said Datuk Dr. Jeffrey Kitingan, Chairman of STAR Sabah in his launching speech at the launching of Star Kundasang Zon Tengah in Pinampadan, Kundasang, recently.

“How could these leaders continue to twist history to suit their political interests without consideration of our feelings and the truth?”

“How could they insist us to celebrate Malayan independence which has no relevance to Sabah and Sarawak?” asked Dr. Jeffrey.

The Independence of Sabah and Sarawak

What is important and relevant to Sabah and Sarawak are their own independence, 22nd July 1963 for Sarawak and 31st August 1963 for Sabah, and that of Malaysia Day or the formation of Malaysia on 16th September 1963?

This 16th September 1963 is the true “National Day” that gives all three (3) territories, Malaya, Sabah and Sarawak, a common identity as “Malaysians”.

By continuing to impose Malaya’s version of history on Sabahans and Sarawakians, what the government is doing is in fact, alienating the two territories.

By insisting that Malaysia is 55 years old now and not 49, the Federal Government is sending the wrong messages to the people.

Firstly, what the government is doing is teaching the people how to lie and manipulate the facts of history.

Secondly, the Malayan controlled Federal Government is now telling Sabahans and Sarawakians (intentionally or not) that Malaysia was nothing more than a “takeover” project for Malaya and that Sabah and Sarawak are now Malayan states/territories so they (Sabah and Sarawak) must now adopt Malayan historical independence.

If this was indeed Malaya’s real intention, then those promises, assurances, undertakings and persuasions by Tunku Abdul Rahman and other Malayan leaders were all lies or “Janji Terang Bulan”.
And if they were mere “Janji Terang Bulan” then the slogan “Janji DiTepati” is an empty and hollow slogan as far as Sabah and Sarawak are concerned.

“If we Sabah and Sarawak have been cheated, we have to stop all these nonsense! and start putting things right” concluded Dr. Jeffrey.

The issue is now at the feet of the federal and state governments to put things right.