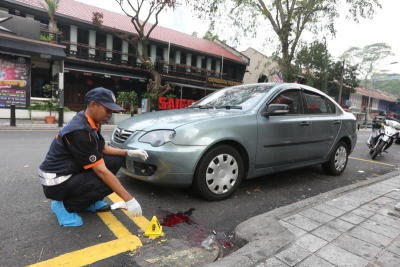 KUALA LUMPUR : Ten men have been detained by the police to facilitate investigations into the cold-blooded killing of two bouncers of an entertainment club in Jalan Dooraisamy early yesterday.

Bouncers Mohd Ajmal Gemain and Mohd Nor Firdaus Rashid, both 21, were shot dead by a gunman after the duo were involved in a fight with his friends outside the Madurai Club about 4.30am.

Kuala Lumpur Criminal Investigation Department chief Datuk Ku Chin Wah said the 10 suspects, aged between 21 and 37, were picked up in the Klang Valley in a series of raids.

However, he declined to give details of the arrests.

In yesterday’s incident, the bouncers were said to have prevented six men from entering the entertainment outlet as its operating hours had ended.

The group demanded entry into the club, however, before a fist fight broke out between the bouncers and two men belonging to the group.

At that juncture, the gunman fired in the direction of the bouncers who died upon admission to the Kuala Lumpur Hospital. They sustained gunshot wounds in the head and chest.

It is learnt that two passers-by were also slightly injured as a result of the shooting incident.

Meanwhile, the Kuala Lumpur City Hall (DBKL) will examine aspects of surveillance and security at entertainment clubs to ensure they adhere to set rules and regulations.

“Other than that, the minimum age for a bouncer should also be taken into consideration by entertainment club administrators to ensure they were trained and experienced to handle unforeseen circumstances (such as gun attacks),” he told Bernama when contacted to comment on the incident. (Bernama)