AIRASIA 'ROB' ME IN DAYLIGHT 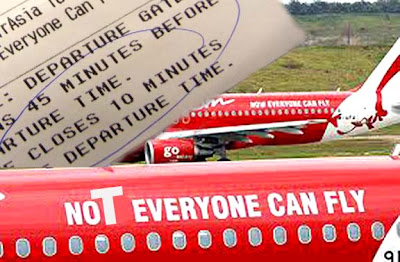 MY flight AK5288 is at 1625 so I have to check in 45min before flight. I reached LCCT at 1535 and straight to kiosk to print the boarding pass which I received from email. But the scanner can't detect the barcode which I taught on the boarding pass.

Then I approach an airasia staff to assist and he told me to use different kiosk which I tried (he did not mention I have a wrong code). Another customer next to me also can't get the scanner detect his code. Then I've been ask to go counter 68 to print my boarding pass.

I've waited patiently behind a que and once at the counter Mrs Noorasmila told me to pay RM30 for printing 3 boarding pass (very expensive!). I'm surprised and explain that I already have the boarding pass in my phone and even show her my IC for verification. Informed her that I'm having problem printing it at kiosk but she told me to show 2D code. I told her it is not in my mobile phone or email.

All the process has caused me losing 30min of my boarding time. So I decided to pay since she insist or I will not get into the plane. I've requested my wife and daughter to quickly go to gate P5 while I settled the baggage screening clearance at Imigresen counter.

But to my wife surprise the P5 gate has closed before 1610. No announcement! Very frustrated since we had a boarding pass. I asked the airasia staff and he told me he can't do anything and ask me to go counter 68. Again?

I met Mrs Shazana who told me it was my fault because I did not do the right way during online check in. She told me there is a next flight at 1725 for RM790 or at 2000 for RM700. So I said it is not much different and will take the first flight.

Then I share my earlier experience to another customer next to me. He told me he had similar experience n problem during mobile Check in. To our surprise while we were having conversation Mrs shazana did not process my booking. Huh? She told me she did not hear I had confirm the booking. So why do I wait there? She not even ask us? Very frustreted again. Luckily i manage to board the next flight but it was delayed.

So this is something to ponder, if the customer delayed but due to Airasia technical or process error the customer is penalized. Customer need to pay? but when Airasia flight delay they just say appology but no rebate? Is this fair?

Please investigate and I would like AirAsia refund my RM30 (for printing...very expensive) + RM790 (AK5292 flight). AirAsia take advantage of customer small mistake to make money...where is AirAsia tolerance and corporate value?