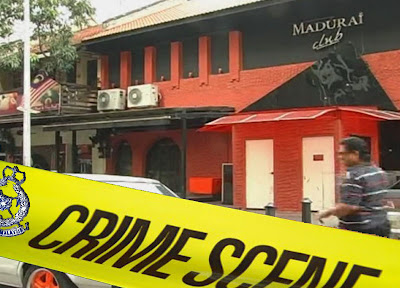 KUALA LUMPUR: The cold-blooded double murder of bouncers by a gunman outside a club early Sunday has raised concerns that the capital's entertainment scene has slid into the control of gangsters, even as police rounded up 10 suspects while the manhunt for the shooter continues.

Police sources said although the motive for the mass shootings outside Madurai Club at Heritage Row that left four patrons injured has not been determined, investigations did not discount the possibility of turf war involving rival gangs.

Two of the injured are still in KL Hospital (KLH) while the rest received outpatient treatment.

Two others who had initially been described by police as bystanders, are in critical condition at KLH. They were reportedly set upon by a mob following the shooting but investigations are now centred on whether the duo were part of the gunman's group.

City CID Chief Datuk Ku Chin Wah said police had rounded up the 10 suspects, aged between 21 and 37, in a follow-up operation in the Klang Valley.

"The manhunt for the shooter is still on and we are getting some vital leads," he said.

Club owners told The Malay Mail there were indications that violence involving bouncers and patrons was spiraling out of control.

They claimed gangs were in control of the city's popular entertainment enclaves at Jalan P. Ramlee, Changkat Bukit Bintang and Heritage Row along Jalan Doraisamy.

The owners said they were at the mercy of these gangs and had no choice but to hire their members to provide security, even if they did not have any experience or training to handle delicate situations.

"That's why we end up having people as young as 18 playing the bouncer role. Due to their inexperience, fights break out regularly," said an owner.

"We want professional bouncers who would be able to defuse a situation and protect the reputation of the club."

Gangs, they said, were aggresively maneuvering to capture more of the lucrative bouncer market.

Speaking on condition of anonymity, the owners said they were raising their concerns with the media because the situation was getting out of hand.

The authorities, they said, were not much of a help.

"We are in a fix. The police can't help us and the gangsters can shut us down if we don't give in to their demands," another owner said.

Club owners and the public reacted with fury following the Madurai mass shootings that left bouncers Mohd Akmal Gemain, 21, and Mohd Nor Firdaus Rashid, 20, shot in the head and left rib, respectively.

The shooter became enraged when his friends who had gone before him were refused entry at 4.30am. A fight broke out and shooting madness began.

The incident was unprecedented in the capital's entertainment industry.

There are demands that City Hall and other authorities enforce closing times of entertainment outlets. Madurai had often operated until 5.30am.

Many are unhappy the Heritage Row, once a prime entertainment enclave, had now degenerated into an area that attracted dubious characters.

There had been several brawls in various clubs there with calls from various quarters to step up security and ensure operating conditions were observed.

Kuala Lumpur City Hall will be conducting spot checks on the nightspots at the Heritage Row in Jalan Doraisamy to ensure closing hours are strictly observed.

Mayor Datuk Ahmad Phesal Talib told The Malay Mail yesterday that this was to prevent the premises from breaching regulations, such as operating without permission and extending their operating hours.

"We had a high-level department meeting (yesterday morning) including with the Licensing Department. Spot checks will be conducted soon," he said, adding that they are drafting a schedule for the checks.

He said under the KL Federal Territory Entertainment Act 1992 and Entertainment Regulation Act 1993 (Act 493), all premises require licences to carry out business at the Heritage Row.

"They must also be granted permission from the mayor if they wish to extend their operating hours beyond 1am."

Ahmad Phesal said City Hall would cooperate with other authorities, such as the police and Immigration Department, if there were criminal activities that would affect the city's reputation.

"The licences can be suspended or revoked if any of the premises breached the Act and failed to follow City Hall regulations.

"At the moment, we have to wait for the police to complete their investigation into the shooting before we can take further action," he said.

He said all the outlets in the area had been licenced to operate food and beverage businesses.

Beyond our control, says heritage body

The Badan Warisan Malaysian has no legal standing in the management of the Heritage Row despite the buildings there being a close to a century-old.

Its executive director, Elizabeth Cardosa, said in a statement yesterday that the body was an NGO with the aim of conserving and preserving Malaysia's building heritage.

"We do not own, nor do we manage the properties called Heritage Row," she said in response to Sunday's shooting of two bouncers working at a club operating from one of the colonial houses in the enclave.

Cardosa said the buildings there were built between the 1920s and 1930s as residential properties.

"In the early 2000s, they were progessively changed into commercial properties, mainly F&B and entertainment outlets.

"The prerogative to rent these properties out belongs to the owner while the local authority (City Hall) has the right to decide on the change of use/licencing for these activities," she said. (The Malay Mail)
Posted by sabahkini.net at 17:57