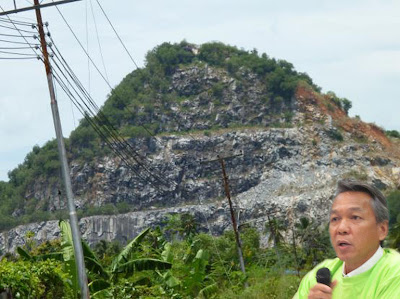 SABAH Environment Protection Association has called on the Sate Government to Repeal Section 15 (2) of the Forest Enactment 1968 (Sabah), because even violation of State laws can deem compliance under a strange provision.

Because of the sweeping overriding power against our own State laws, nothing seems safe and Sabah risks losing its valuable natural resources and heritage such as Maliau Basin, Danum Valley, the Balambangan limestone massifs and even Mt. Kinabalu to private businesses, foreign companies included, through the stroke of an agreement by a few State CEOs.

Section 15 (2) which opens the door to potentially serious public losses, before future damages surprise everyone simply because there exists such an incredible lope-hole which deems non-compliance to State laws as compliance, because it accords superior status to provisions in license agreements.

Sepa discovered this insidious power residing in Section 15 (2) of the forest Enactment during our struggle to save Tawau’s Kukusan Forest/Trig reserve. We have already lost a once Class 1 Protection forest in Kukusan Hill apparently because of the superior status of the provisions in an obscure supplementary agreement.

“The agreement struck on 9th August 2010, obligated CEO of Hap Seng Group Quarry and Building Material Division Director, Ron Delaney to contribute RM2 million to the Sabah State Forestry Department’s Forest Conservation Trust Fund and USD66, 000 (about RM214, 000) to the department for tree replanting and rehabilitation that would involve 66 hectare in Kukusan Forest Reserve, purportedly in line with their so called Corporate Social Responsibility.

In return, however, the Government and Hap Seng Building Materials entered a 15 years, Supplementary Agreement for the whole-of-life Plan and Extension of Area for the Kukusan Quarry supposedly for a continuous stream of quarry products to the community. But our Tawau market sources said the stones were exported to Brunei and Indonesia.

At the end of 15 years, we believe it will flattened the whole hill and will left behind a toxic lake with no beneficially to the people of Sabah especially Tawau.  That was the big wake-up called lesson, Sepa learnt from our battle to save Tawau’s Kukusan Hill Forest Reserve from annihilation, over the last few month.

Sepa thought if we could highlight in the local press Hap Seng’s history of serious violations against Class 1 Protection Forest law on the strict no take and no conversion ban, Class 2 Commercial Forest rules limiting activities to only timber logging and forest produce and no destruction of forest, and also violation against Land Ordinance (Sabah Cap 68) on government Trig Reserve, the authorities would act to cancel Hap Seng’s quarry license and leave kukusan Hill alone.

We traced hard facts of history to show how Forest Department actually designated Kukusan Hill a Class 1 Protected Forest between 1984 and 2003 but Hap Seng which began quarrying Kukusan on July 1980, dynamited freely in a Class 1 Forest all through those 20 years. When people protested about the violation, someone went to the Legislative Assembly to downgrade Kukusan to a Class 2 Commercial Forest which actually still bars quarrying but Hap Seng continued as usual.

When the double violations we cited were not enough. SEPA engaged a licensed private surveyor – Jurukur Sabah, to assess whether it had violated Section 26(1)(2) and Section 160 of the Land Office’s Government Trig Reserve under the Land Ordinance (Sabah Cap 68) in early March 2012.

To our shock, the survey report completed in Mid March revealed Hap Seng’s has blasted away 6.33 acres or 99 percent of the 6.39 acre land. But still, the Director of Land and Survey did not come out to cancel Hap Seng’s licence in the same way that he cancelled the operation license of Leeka Quarry on Sin Onn Hill, at the end of last year.

The pleasant surprise to us all is that Sin Onn Hill actually sits on a private alienated land but the Land Office showed it had the power to act incisively to terminate its license on account of a violation of Government Trig Reserve law on a Hill Ridge.

But both the Forestry Department and Land Office mystified SEPA why they took no action against Hap Seng on apparently even worse violations.

After the big fuss in the local press, Delaney from Hap Seng, flew over to Sabah personally to meet SEPA in a closed door session but instead of being apologetic, he categorically declared the company had fulfilled all legal requirement under State laws and advised SEPA to go after the authorities if we thought they had done anything inappropriate. But Delaney’s both all-compliance claims let the cat out of the bag.

We think this is why Sabahans should question the outrageous, sweeping overriding power of Section 15 (2) of the Forest Enactment 1966 (Sabah).

But before we could even confront the relevant State departments, the Director of Sabah Forestry Department went to the press to justify the deal, labeled Kukusan Hill in its present condition as a mere ‘paper protection’ and argued further that accepting the conservation money from Hap Seng for a good forest conservation cause is proper since Sabah has the forests but lacks finance.

It deject SEPA to see the custodian of one of the richest tropical timber forests in the world now bow to the stone business of a foreign own company for money, because the Department allowed people to strip and empty its timber content, in the way the Kukusan Class 1 protection Forest has been stripped of its timber, right under the nose of the Forestry Department.

SEPA fears that if a State Department is allowed to take money from private business, it immediately owes private business interest a big favor, and we risk sell-outs of all public resources to a few because money motivates people powerfully to make not necessarily the right decision for public interest.

We now risk a trend where we risk the regulator being subject to the regulated, their terms and conditions which risk comprising their sacred mandate as guardians to safeguard the people’s vital resources.

SEPA therefore urge the State Government to bar State Department or Agencies to accept funding from private business interest and repeal Section 15 (2) of the Forest Enactment.

The Government should use instead tax payers’ money to increase cash flows substantially to department mandated to protect the State key natural resources to ensure effective, independent regulation, through the annual State or Federal budgets, instead of forever treating conservation as a worthless, backyard issue.