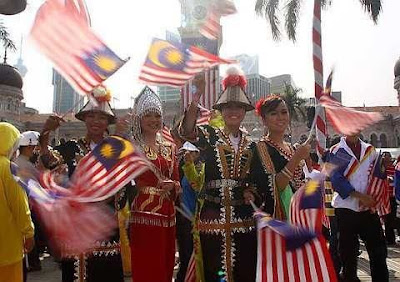 CHUNK......By hijacking Merdeka celebrations as a BN election campaign, the government has ostracised a large chunk of the Malaysian population.

KOTA KINABALU: Barisan Nasional’s Merdeka Day slogan  'Janji DiTepati' is a ‘big blunder’ that is likely to cost the coalition in Sabah and Sarawak. The slogan has already courted controversy in the peninsular and is seeing further rejection in the Borneo states.

According to Sabah STAR deputy chairman Daniel John Jambun, BN’s bid to psychologically manipulate Malaysian by celebrating its ‘own successes’ is ‘plain arrogance’.

“(Now) by doing so, BN has alienated the rakyat who are in the opposition.

“Now there is no reason for the opposition to celebrate the national day together because it has become ‘BN’s Day’!

“There is no reason for people in the opposition to be patriotic with the national day because to celebrate it means to support BN!” he said.

He said this was probably the reason why there were hardly any national flags – Jalur Gemilang – on the streets in Sabah.

“No wonder the number of flags being put up on shops, offices, houses and vehicles have suddenly dwindled to almost zero compared to previous years.

“Now even the Jalur Gemilang has a strong tinge of BN’s arrogance so much so that many people no longer feel any patriotic feeling when they see it flapping in the wind,” he lamented.

Jambun said, it was increasingly obvious that the ruling BN is either ‘desperate’ and worried that it may lose the next general election or ‘simply over-confident’.

“It (BN) is using everything and anything it can get its hands on, even the people’s patriotic heritage to glorify itself?

“They are either desperate, over-confident or simply super-arrogant that it thinks that it will gain a lot of political mileage by making it a part of the BN.

“Over-confidence more likely because they have hijacked and damaged the whole meaning of patriotism.

“So now it is meaningless for the BN to appeal to the people’s sense of patriotism because when the prime minister or any top BN leader talks about patriotism they know it means only one thing, ‘Come and support the BN!’”
Posted by sabahkini.net at 08:14