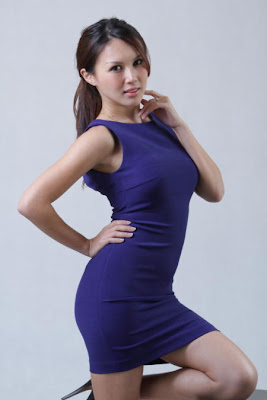 TELEVISION personality Julie Woon was a victim of a smash and grab theft, while driving recently. She lost her handbag with her iPad in it and apparently the same thieves tried it on another car minutes later. “I was lucky I was unhurt but I was in total shock when it happened,” she says, still reeling from the ordeal.

She recalls the incident  that happened about 6pm on 27th August, when she drove out of the 1Utama Shopping Centre and passed Centrepoint, Bandar Utama. When she stopped at the traffic lights, two guys on a motorbike rode past her car and glanced inside.

Before she knew it, a second motorbike with another two guys smashed her passenger side window and grabbed her handbag. The thieves even had the cheek to cheer and laugh after that, she told Daily Chilli.

“Everything happened so quickly, I was still in a state of shock when both motorcyclists rode away. I can’t remember whether my handbag was on the car seat or on the car floor. I couldn't do anything because there were cars in front of me. A lorry driver next door tried to comfort me after it happened. He told me to go to the police station, so I did,” she adds.

After Julie’s incident, she said that there were a few eye witnesses that claimed the same motorcyclists proceeded to try the same thing at the tunnel in Tropicana just minutes after her case.

“This lady had her bag under the car seat but one of the motorcyclists stretched his whole body into the car and reached for the bag on the floor. Good thing the lady grabbed her bag when she realised what was happening!” she said.

Julie says that will all these crimes taking place in homes, shopping complex car parks and on the streets, we’re all living in fear. “It’s not how I want to live,” she says. She commented on her Facebook page, "So people, please be careful. Be aware and never take for granted that these things would never happen to you. Have a safe day!”

Julie Woon is a graduate in Bachelor of Commerce majoring in Economics and Marketing. She has acted in the TV series The Blogger Boy and is currently a host on 8TV's Quickie show, which covers events, entertainment and tech news. (Daily Chilli)