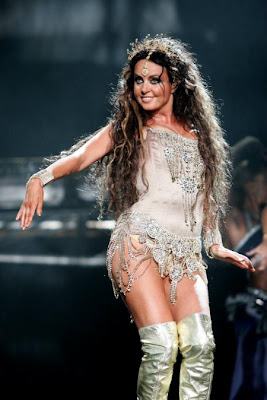 BRITISH singer Sarah Brightman may be the next paying passenger to ride a Russian rocket to the International Space Station, the Interfax news agency reported last week, citing an unidentified official in the space industry in Russia.

If it happens, Brightman, 52, would make the journey in 2015 and would be the first paying customer since Cirque du Soleil founder Guy Laliberte who donned a red clown's nose during his 2009 trip, the official was cited as saying.

Russia has sent seven private passengers to the International Space Station, each of them reportedly paying at least US$20 million. American investment manager Dennis Tito was the first to make the journey in 2001.

But seats on the three-person Soyuz capsules have become scarce since US space agency NASA retired its space shuttles last year, leaving Russian rockets as the only craft capable of carrying crews to the station for now.

Brightman—who rose to fame starring in the original London and New York casts of The Phantom Of The Opera—visited Russia about a month ago and received the approval of a medical commission to begin training at the Cosmonaut Training Centre outside Moscow, the source added.

Brightman was married to composer Andrew Lloyd Webber in the 1980s and pursued a chart-topping solo career after their divorce, bringing classical music to a broader audience and selling millions of records along the way.

Interfax cited an unnamed source in the Russian space industry saying plans to send a two-person crew to the station for about a year in 2015, instead of the usual six months, would free up a seat for a paying passenger on that trip or others around that time.

Russian space agency Roskosmos said last week it supported the idea of gradually extending expeditions to the station to a year, but said that no decision had yet been taken. (Reuters)