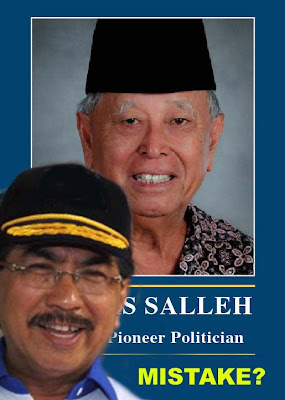 KOTA KINABALU: The Sabah Barisan Nasional government will be making the same “mistake” it did more than 30 years ago by agreeing to negotiate its oil rights with the federal government, a politician here has warned.

Sabah Progressive Party (SAPP) Liawan vice-chairman Joseph Wilfred Lakai said today that there was no necessity to re-negotiate terms between the East Malaysian states and the federal government on the Petroleum Agreement 1976 .

“Why should Sabah and Sarawak re-negotiate the Petroleum Agreement when even in the first agreement Malaya did not honour the terms?”

He said that being the main producers of oil, Sabah and Sarawak should rightly be the sole beneficiary of the oil income.

Lakai claimed that the terms of the agreement are not only lopsided but grossly unfair to the oil-producing states.

He said records showed that in 1976, Sabah and Sarawak’s rights to their oilfields were signed away for just 5% “royalty”, which seems not to be what it really is.

Lakai, a pilot, accused the Malaya-centric government of acting as a colonial master by annexing, “Malayanising” and looting Sabah and Sarawak since 1963 to fulfil its objective to create a “Greater Malaysia”.

“Today, both the Chief Ministers of Sabah and Sarawak want to re-negotiate… (but) the issue is that the petroleum belongs to the people, not the leaders.

“They have no right to re-negotiate on behalf of the people,” Lakai said.

He pointed out that only the State Legislative Assemblies of both states have that power to re-negotiate on this matter.

What about export tax?

The SAPP leader also questioned the need to export petroleum from Labuan and gas from Bintulu.

On the 5% oil royalty Sabah and Sarawak are now being paid by the federal government, Lakai said it was never a royalty but total sale based on FOB.

“The global petroleum and gas price for the last two decades was excellent. Why does the amount paid to the state government remain constant?” he said.

Meanwhile, the SAPP leader agreed with Sabah State Reform Party (STAR) chief Jeffrey Kitingan that the 5% is a cash payment payable by Petronas under Section 4 of the Petroleum Development Act, 1974, and had nothing to do with royalties.

Jeffrey had last week said the the cash payment was in return for the ownership and the rights, powers, liberties and privileges of the oil and gas resources vested in Petronas by the state.

Furthermore, Section 4 provides that the cash payment is to be agreed between the parties, and not imposed upon.

Jeffrey said the general opinion was that the existing oil agreement is unconstitutional and invalid because it was not only unfair but infringed on fundamental state rights.

The conclusion that could be drawn, he said, was there was unlikely to have been any negotiations in 1976 for the amount of the cash payment.

If terms had been properly negotiated, Sabah would not have ended up at a mere 5% for transfer of ownership of the oil and gas resources to Petronas.

Jeffrey also pointed out that then chief minister Harris Salleh, who signed the oil royalty agreement in 1976, recently stated that Sabah was forced to accept the 5% cash payment.

Both previous Sabah chief minister Mustapha Harun and Fuad Stephens had refused to sign away the state’s oil rights for the extremely low rates it would get in return.
Posted by sabahkini.net at 08:41