ANOTHER GRAVE YARD IF TOO LATE? 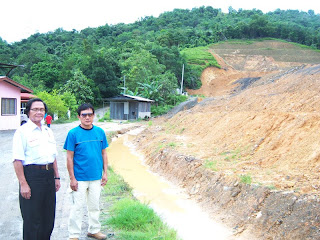 DANGEROUS…..Edward being shown the unprotected hill slope and shallow drain.

THE RESIDENTS at Kg. Malawa in Sepanggar were here faced with constant flooding and mud slide into their homes here due to a massive earth works project on a hill just adjacent to their ten houses.

In spite of many complaints to the developer, the DBKK and other authorities by the house owners, there were no actions and responds from them. The developer had only come to clean up the mud that flown into the houses. This has caused much difficulty, anger, and inconvenience to the house owners.

He asked why such a massive earth works project which is so near to the residential houses and having an earth fill up to 30 over feet high be allowed to be carried out without proper drainage and protective retaining walls built.

The rain water is just spilling over bring mud along and flowing through the houses below. The reclaimed earth slopes were not protected from erosion and covering with closed turf, and it is just being left exposed to rainfall and severe erosion.

The house owners told Edward that they lived in fear and worried that the whole reclaimed hill slope may come down onto them during heavy rain. Then it will be real disaster and they will lose everything. The rain water brings a lot of mud and they have to clean every time whenever it rains, and who is helping them from all these agony?

Edward feels that it is under the law that any earth works to be carried out must first obtain the consent and approval from the local authorities. This case happened in the DBKK area, and he wonders whether there is an earth work plans submitted for approval to DBKK and any approval granted.

By the look of the site situation, it is doubtful that the developer has followed the standard requirement laid down by the authority for the earth work carried out. He urges the DBKK to come immediately to inspect, check and advice the developer on the necessary work to remedy the situation. The developer must first consider the well being of his neighbor before the profit on his project. He should act before any disaster strike.

The house owners can also put up a legal suit against the developer if any serious damages to their properties caused by the flooding and mud slide arising from the earth works next door, and this is their basic rights.

Edward urges the local authorities to be very careful and be alert on all this earth work projects which involved earth filling and hill cutting, and must ensure that all works are carried out with a high consideration of not to affect nearby properties and human lives.