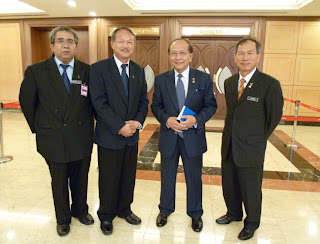 The issue of the slow, weak and limited coverage of the internet services in Kota Kinabalu City is a matter of major and urgent concern, and it is seriously affecting many users in the area.

There are many complaints received by the KK MP office concerning the particular issue. They all demanded the government to get down to improve and to upgrade the system without further delay. The commercial business centers are particularly being affected the most, which include many thousands of other domestic users.

Kota Kinabalu Member of Parliament Hiew King Cheu had asked the Minister of Information, Communication and Culture, Dato’ Seri Utama Dr. Rais Yatim, in the Parliament lobby today whether the government has any plans to upgrade the internet service in Kota Kinabalu City and the nearby towns like Tuaran, Penampang, Putatan, and Kinarut, and how soon this can be implemented.

The Minister Dato’ Rais Yatim said that it is not easy to immediately implement plans to upgrade the internet system because the arrangement and upgrading work with the various tele-communication companies has to be made. The economy aspects have to be taken into account and to be balanced.

He further commented that it is no use to just point finger at the federal government, but the state government at the same time will have the equal responsibility to get the internet service to efficiently working to serve the users.

Hiew told the minister that there is really a need to upgrade the internet service in Kota Kinabalu due to its heavy usage at peak hours and become overloaded. This caused the system to be weak, slow and sometimes the internet servers could not be found. The connection always experiences cut off too.

As the MP for Kota Kinabalu, he has a duty to request the Ministry to pay particular attention on this important service, and which is a compulsory part of life for many folks in KK City. It is not only highly needed in KK but the whole Sabah also needed the same internet service.

Hiew hopes that this will be executed and not a plan that never gets kick off. The Ministry should put pressure on the companies. The Sabah State government should also do their part to solve the problems instead of blaming, finger-pointing and trying to relief themselves from all responsibilities.