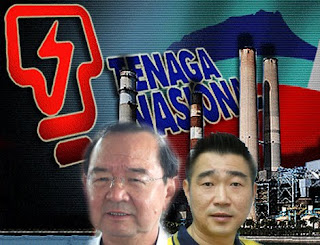 MALAYSIA is one of the few oil and gas producing countries in the world.

Sabah especially, being rich in oil and gas, has been contributing millions and millions of Ringgit to the Malaysian government.

Electricity is a basic utility and being one of the most basic needs for people, it comes as both logical and obligatory for the BN government to provide for a stable, reliable and affordable supply of electricity to a contributing state like Sabah in return.

SAPP CLC Api Api Organizing Secretary Clement Lee says that it is totally unfair, unjustifiable and unacceptable, relating to the press statement issued by the Datuk Seri Peter Chin today (24/6/2011) with The Daily Express carrying the title ‘Power Tariff Review’ was due to the increase of the fuel prices.

Clement Lee would like to ask TNB (which owns SESB), the main electricity supplier in the state, how it can still make losses in a monopoly state of business, like that of Sabah's?

The main causes of loss incurred by TNB and SESB are mainly due to mismanagement, incompetency, poor planning and execution methodology, lopsided deals, high maintenance costs due to the purchase of used and second-hand power generators, parts and very possibly, inferior services.

The compensation of about RM70 million to a Chinese company due to the scrapping of the coal power plant in Sabah recently proved yet again that poor management, planning and decision making have caused our tax money to go down the drain.

The government should have consulted the state assembly, people and NGOs before committing and signing an agreement with the supplier to prevent wastage of time, money and other resources.

This was clearly contradicting to the BN's 1Malaysia slogan “People first, Achievement is main priority”.

Another one of the contributing factors that made TNB and SESB suffered losses was due to power theft mainly committed by illegal immigrant in the state which prove to be a long term liability to the government.

The people of Sabah have been suffering and enduring with one of the highest cost of living of any states in Malaysia and yet the lowest take-home pay, especially for young working adults for umpteenth years.

Clement reckon the present BN government will need to solve its internal problems first as mentioned above before shifting the burden to the people.

So, the suggestion by Datuk Seri Chin Fah Kui to review the current electricity state tariff is totally unfair, unjustifiable and utterly unacceptable.