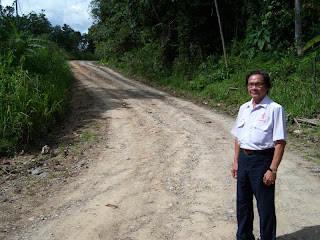 THE visit by the Sabah DAP KK MP Hiew King Cheu, the Vice Chairman, Edward Ewol Mujie and members to the remote interior Tambunan villages proved that there are many associated problem both in the aspect of development, infrastructure, agriculture, industries, social and welfare matters.

Edward in making the statement after the visit in Tambunan said there are much to do in improving the various aspects and matters arising in the neglected rural district and kampongs.

He cited an example that during the walk about in the Tambunan town, they were told and received many complaints from the people there concerning many matters that is affecting the lively hood of the people there.

Edward thought that there should not be problems there, because this is a constituency held for many decades by the veteran politician Tan Sri Pairin Joseph Kitingan. He said you won’t know until you enter to the heart of the area and talk to the people about their problems.

We have received complaint on no developments, no industries set up, padi fields are not productive and without updated irrigation and drainage system, bad kampong roads, kampong schools received no attention, unemployment high, no industries development, difficult to make a living especially youth moving out, and so on so for.

When the KK MP Hiew gave a talk at the mini bus stop, a crowd gathered to listen and asked for the ‘Rocket’ newspaper and the DAP VCDs. Many people appreciated the visit of the KK MP and they hope the DAP team would come back to Tambunan for more similar visit to enlighten them on the current issues in the country, especially on the political direction. They said they never have the chance to listen to the talk from the opposition, and there is so much they don’t know and need to understand more.

After listening to Hiew talking on the problems faced by the youth working in Singapore and Semananjung, one young man in his thirty from the Tambunan kampong immediately said he would drop his plan to apply for going to work there, and he will continue to tap his 10 acres of rubber trees which can fetch him RM 1,200 per month easily. Edward told the people don’t be easily cheated by the beautiful words of the agencies, and many of these agencies are not licensed.

One villager complained to the government about his bad road and asking for his road to be sealed with bitumen, the surprising answer was, “you are lucky to have a road, don’t ask for the road to be sealed”!

The group later drove to the very remote Kg. Kaingaran where the road condition is really bad. It is only 15 KM and the government still cannot get it sealed. The group was stopped by passing by villagers, and they forwarded their dismay and complaints.

When they reached the S K Kaingaran, they found the road of the school and the entrance road is real bad, as if there is no maintenance at all. How can such a bad condition existed in a kampong just 15 KM away from the Tambunan town?