SETTING UP OF A SINGLE ROAD DEPARTMENT 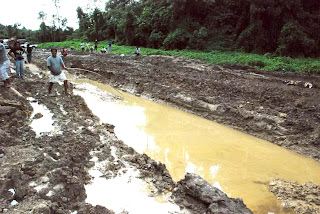 THE KOTA KINABALU Member Hiew King Cheu had make an open call upon the government to set up a single ‘Road Department’ in Malaysia to tackle the various problems arising which include the overlapping of jurisdiction/power, allocation, areas of responsibility, legislative restriction, and on the maintenance of all roads and highways.

This gave rise to the difficulties faced by the road users, the local authorities and councils, JKR (State and Federal), developers, and government departments. Sometimes the officer in charge has to check the road under complaint is actually belonging to which department. Many times, the council road is in fact not the council road but belonging to the Federal Ministry of Rural Development or the JKR.

To this effect, Hiew had asked the Minister of Works in a written question in Parliament concerning the proposal in order to streamline the road building and maintenance to benefit the road users.

The minister’s reply of course is as expected, and he said there is no need for such suggestion to set up the proposed Road Department at this moment. He said in his written reply that the various government departments are responsible to undertake all related work under them, for example the JKR will undertake the Federal and the state road, and the local authorities will undertake the council road.

Hiew commented that the minister did not see the real need of the proposal Road Department because he does not know the real problem faced by the road used and the public.

In Sabah, the people had enough problems on the bad road faced by them every day. The many so called Federal highways here are worst then the kampong roads in Semananjung. We have been waiting patiently for the Federal Ministry of Works to come up with some positive plans to upgrade our very bad roads in Sabah.

We demand the Minister of Works to come out from his comfortable air-conditioned office to try out our bumpy and muddy road. We wonder actually how many times in a year he has visited Sabah to see for himself the bad condition of our road. Do we deserve a third class road in Sabah, or are we a third class citizen in Malaysia? If not, he better do something, because the Sabahan will not be keeping quiet anymore, enough is enough.