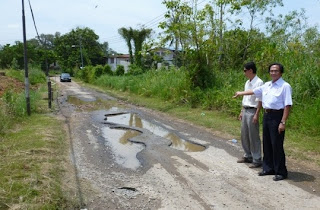 SABAH DAP Kapayan Branch received numerous complaints from the near by kampongs and road users concerning the damaged road section of the Jalan Mogonibong in Kg. Bahang, Penampang.

A site visit was conducted by the branch chairman Stephen Jacob Jimbangan and the Sabah DAP vice chair Edward Ewol Mujie who is also the Local government and Housing Bureau chairman.

Stephen saw the badly damaged road section and found out that the main cause is due to the bad drainage on both sides of the road. The water cannot be drained and being collected on the road surface, thereby causing the road being flooded constantly and the road bitumen surface cracked up forming deep holes. 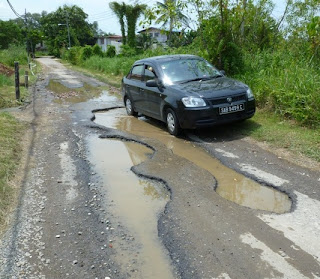 POTHOLES…….A lady’s car trying to find her way through the potholes.

There is urgency for the authorities to move in to make drains at the side of the road and to resurface the damaged road surface immediately. This road was built and sealed by the Federal Ministry of rural Development sometime age, but since then there was no maintenance on the road according to the kampong folks near by.

Edward reminds the authorities to constantly keep up with the surveillance work on all the kampong roads and don’t wait until the complaints reach them. He is sure that many civil servants and officers also make use of the kampong roads why they did not file their complaints and get the roads repaired by the relevant authorities.

Edward said to repair the section of the damaged Jalan Mogonibong is a very simple job, and may be a few hours, what is the reason behind the authorities not taking immediate action? Where is the efficiency of the government, and what is the use of the BN slogan “Rakyat didahulukan”?

“We want some quick action to repair the road, so that our cars won’t get damaged driving through the muddy and deep holes at the Jalan Mogonibung”, said a young lady who was driving dead slow to avoid the deep holes and mud.