COMMITTEE….SAPP leaders led by Yong (seated 6th from right) join Conan (seated 4th from left) and the organizing committee on stage, to give themselves a morale boost by shouting “SAPP Boleh!”, at the end of the function.

TO BRING Sabah back to its past glory and to pull themselves out of the present doldrums, Sabahans must be determined to rally behind local party like Sabah Progressive Party (SAPP), which is genuine and committed in fighting for political autonomy for Sabah.

He explained that this is important citing the quandary that Sabahans are currently in under Barisan Nasional (BN) rule which, he described as a form of ‘Federal-State collusion’ (to exploit both the State’s rich natural and human resources).

He cautioned that similarly, if Sabah comes under Pakatan Rakyat rule in future, the same fate may befall Sabah/Sabahans.

“It will still be the same – ‘kapsit sama’, and not ‘kerjasama’. We reject this ‘kapsit sama’ set up. Therefore, we want genuine kerjasama and please don’t think that they will give us autonomy as a matter of charity, but only because they have to,” he said, stressing that this message is especially for all those ‘fence-sitters’ out there who have yet to support SAPP. 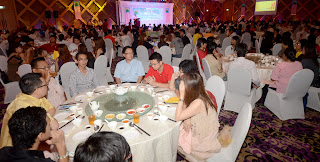 He conceded that currently SAPP is facing a dilemma of having to face two different schools of thought, with one group of people determined to support local party like SAPP, and another one thought it’s no point to support SAPP as it’s just a ‘mosquito party’ and can’t form the State government even if it wins in the coming general election.

“This is the dilemma that we have to overcome, and this is where our sun will rise and shine. I put this to you, that you can do something to overcome this dilemma,” he said.

To begin with, he stressed that it is important that Sabahans must start believing in themselves that they are capable of governing their own state, even better than now.

And to substantiate this, he cited the fine examples of Brunei and Singapore who despite their small size and not joining the Federation of Malaysia in 1963, are now clearly better off than Sabah and Sarawak who joined.

“Back in 1963, Sabah, Sarawak and Singapore joined Malaya to form the Federation of Malaysia as, the British was saying that if you don’t join Malaya, you will not be able to administer (your own state).

“From that time, it has been implanted in the mind of Sabahans that we cannot...that we must follow (Kuala Lumpur), from London to Kuala Lumpur we will follow. That was 1963.

“But, Brunei did not join and Singapore pulled out two years later. Lee Kuan Yew came to Sabah to persuade our leaders to join Malaysia. But after we joined Malaysia, he left without even saying good bye to us!

“Today, in Asia, which are the two smallest nations? None other than Brunei and Singapore and they are also the richest. Their currencies are also the strongest,” he pointed out.

Yong further reminded that Sabah which is rich in natural resources like oil and gas, was once the richest state in Malaysia but now the poorest state.

“How could this be possible when Sabah is an oil and gas producing state? We should be better off today especially when the global oil price goes up, instead of becoming poorer.

“Hence, we must first convince ourselves that change must start with us. When the sun rises tomorrow, there will be a new era in Sabah. All the problems like poverty, land issue etc can be resolved. We must not be looked down upon by others!”

“Looking at that, that’s why we come up with the slogan of ‘SAPP Boleh!’ and the young people of Sabah Boleh!

“This is how we change our negative mindset to positive mindset i.e. from ‘cannot win, win also no point, to we can win and we can govern’,” he elaborated.

The former Chief Minister of Sabah went on to cite United Kingdom as another classic example of how a once small and weak nation could turn the table around to become the powerful British Empire, with colonies all over the world, including Malaya and Borneo, at one time.

“Once upon a time, England was a small island nation and it always come under attack of the neighbouring countries. But over the few hundred years, England developed a strong navy and later ventured out to conquer other countries like Canada, America, India and Borneo to establish one of the world’s greatest empires.

Hence, we must believe that like England, we too can turn the table around,” he said.

Yong further reminded that the political equation in this country has changed after the March 2008 general elections.

“Hence, after 47 years of waiting, it is the right time now for the sun (SAPP youth leaders) to rise and to shine! SAPP Boleh!” he proclaimed to thunderous applauds from the audience.

“We in SAPP are very proud that the second generation of SAPP members are now in the front line in the fight for Sabah,” he added.

They spoke on the various perennial and pressing issues affecting Sabah, such as the continuous presence of large number of illegal immigrants in the State; high unemployment rate among the people, the youth especially; high inflation versus low pay for the wage earners, etc.