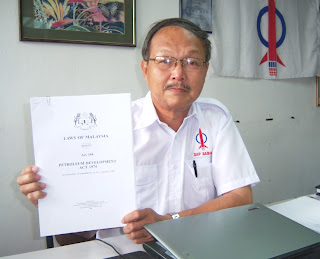 KOTA KINABALU Member of Parliament, Dr Hiew King Cheu asked in a question on the 22nd June in Parliament concerning the amendment to the Petroleum Development Act 1974, Act 144 due to the changing economy and requirement of the states, especially Sabah and Sarawak who are the big oil and gas producing states.

MP Hiew sees the importance in the amendment to be made in the Petroleum Act, because Sabah and Sarawak are the big oil and gas producing states and yet we do not benefit as what we rightfully deserved. The Act was made in 1974, and during that time this was not the same as it is now. The prevailing situation has made this Act becoming more inapplicable and unfair to the East Malaysian.

The reply came from the Prime Minister Department saying that the Petroleum Development Act 1974 (ACT 144) gives special power for Petronas on the searching, exploration, and process the petroleum whether on shore or off shore in Malaysia.

As stipulated in the Act 144, Petronas has been given a ‘Vested Deed’ by the Federal government and all the state government agreed to the exclusive right to Petronas. The condition in the Petroleum Development Act 1974 (Act 144) is adequate and sufficient for Petronas to operate efficiently and to ensure development of the Petroleum industry. This means that there is no need for the Act to be amended and altered.

Hiew said this is not fair for Sabah especially when there are no development projects allocated by Petronas in Sabah. Our oil and gas has been siphoned away and exported. Where is the petroleum downstream industrial development in Sabah?

There should be at least one oil refinery and one LPG (Liquefied Petroleum Gas) plant to be set up in Sabah. We should be looking at some positive development programs to help the Sabah economy and not by simply shipping out our valuable crude oil to a foreign refinery first, then we buy back the refined petrol at a high price. Don’t wait until our crude oil and natural petroleum gas to run dry, then only consider to set up the related oil and gas industry.

The oil and gas contractors from Sabah are right to ask for a fair and bigger share from the various jobs and contracts given out by Petronas in Sabah, which is now only 30% allowed.

At least our local oil and gas contractors can get a bit more work to survive over this difficult period. If Petronas is going to fulfill their vested duties to take care of the Sabahan, they should arrange to allow bigger share of the work for local Sabahan. It is better still all job goes to Sabahan, and not for contractors from outside the state or even overseas.

If BN government refuses and insist not to amend the particular Petroleum Act 1974, we will have to wait until Pakatan Rakyat to take over the federal government to do that. This urgently needed amendment will definitely include the increment of the oil royalty sharing of 20%, jobs for Sabahan Oil and Gas contractors, and setting up of Oil and Gas industries in Sabah, and a special rates for the fuel and gas supply to Sabahan.