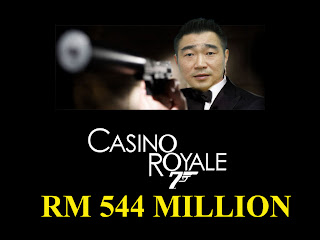 SAPP CLC Api-Api Organizing Secretary, Clement Lee would like to query the RM544 million worth of bonds issued by BN-led government as stated by the Chief Minister during his budgeted speech on 19 November 2010 at State Assembly ‘The estimated revenue for 2010 being over the RM3 billion level takes into account proceeds from the issuance of bonds worth RM544 million effective this year.’ Which in actual fact meant that the estimated State revenue was merely RM2.5 billion.

Bond is a form of debt investments where state government loans a certain amount of money, for a certain period of time, with a certain rate of interest, to companies and individuals at large at a discounted price.

How could the BN government account the RM544 million worth of bonds issued, which in essence are debts, as State Revenue in 2010?

When such bonds mature in 5 years time, the State government will need to buy back the bonds at the original price from the investors.

If the BN-led government really had a strong financial backing in the state coffer, why would they still need to issue bonds in order to raise funds? It seems like the present BN government is not telling the truth and utterly misleading the public.

The present government should seek more sources of income like opening up more land for cultivation and increasing the productivity of the present state-owned GLCs and reducing the operational costs which would surely translate to revenue, among others.

What about the RM1 billion special allocation promised by the federal government for the Sabah Development Corridor project?

Another pressing issue is that, why did the state government give away 5,000 hectares of palm oil land to United Malacca Berhad whilst local based Sabahan companies were more than capable to develop them?

We want the BN government to explain on these matters and clear public ambiguity and confusion.