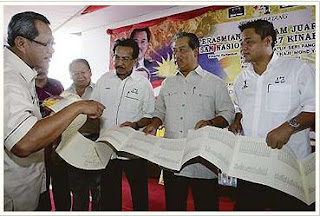 SABAH Land and Survey Department (JTU), Director Datuk Osman Jamal defended the issuance of communal titles, saying they were introduced with the noble intention to expedite land alienation to natives and to ensure they develop their land at the same time.

Commenting on a recent statement by the Human Rights Commission of Malaysia (Suhakam) that the beneficiaries of the communal titles had not been briefed or engaged in discussions earlier, Osman said this was not the case because the Government had talked to them before they agreed to sign the document.

He said it was, therefore, not practical to simply delay or stop the process of issuing communal titles just to satisfy some non-governmental organisation's plea, because the issue was to see that the majority benefited from the programme.

"We accept any suggestion, as long as it is constructive and sincere for value-addition. But why must we delay, when there is more advantage than disadvantage?

"In fact, there is only a lack of understanding on the part of the villagers. They have not rejected the programme. As in most new programmes, we tend to face challenges. So, we will have to continue but, at the same time, we will continue giving information to beneficiaries. And the public can also come to JTU for more information on communal grants," he said.

At a national inquiry held in Penampang last week, Suhakam commissioner Jannie Lasimbang said many rural people in Sabah who were recipients of communal titles were still vague about how these grants worked.

She said a community-based NGO, Partners of Community Organisation (Pacos), had proposed that the government consider delaying the issuance of upcoming communal titles to allow for all the issues to be ironed out first.

Among the issues she mentioned was the clause in the communal title that says the Land and Survey director can remove and add any of the beneficiaries.

Osman explained: "There is no such thing as the Director simply changing the beneficiaries. The Director may be the middle person but there are a lot of instruments and laws involved here. One can't simply do what one likes.

"And, furthermore, 'tertakluk kepada kelulusan pengarah' (subject to the approval of the director), that term has been used since the Sabah Land Ordinance started in the 1930s. It was not an issue before.

As I have told Jannie, there are mechanisms and people should not make such comments unless they have studied all the conditions first."

On civil servants earning more than RM1,500 a month not entitled to become beneficiaries of the programme, Osman said this was more than justified as they wanted to help the hardcore poor and poor people first.

"It is unfair to give to people who have jobs and a salary. Of course, we put the poor and hardcore poor first as priority. If there is extra (land), the civil servants who are interested may apply, but they still have to get approval from the directors of their respective departments first," he added.

Osman explained that the communal title was not actually a new concept but something that had already existed in the State Land Ordinance.

"In this ordinance, government issues four types of title, namely Town Lease, Provisional Lease, Native Title and Communal Title. This means the communal title we are issuing, it was already there since that time, but rarely applied, usually the first three types," he added.

However, in 2006, JTU received a memorandum from Pacos saying that the state government had discriminated against Sabah natives in terms of land allocation, and that was when JTU started looking at the best alternative to expedite land issuance to the people.

"As I've mentioned before, due to the limited manpower of 56 staff around Sabah, we only have a capacity of processing 15,000 to 16,000 land applications a year.

"With 248,000 outstanding land applications flooding the department now, we can't rely 100 per cent on normal methods. That's why we had to amend the law, which was gazetted on Dec 2009," he said.

He said that when the chief minister proposed that a site be developed, he could sanction the communal titles without the need for applications or the filling of forms.

"I would like to stress again that these communal titles are being issued not because of elections. We have been thinking of this approach since 2007," he said.

He said a government-linked agency was included in a joint venture to develop the land under communal titles because, from previous records, only 40 per cent of owners of Native Title (NT) land in the state had actually developed their land.

"To date, we have issued NT to 169,729 natives, totalling 64,584 hectares. But why do the researchers say there are still a lot of poor and hardcore poor people here. It is because 60 per cent of these NT holders did not develop the land.

"Also, some of the areas do not have infrastructure such as roads, so that makes it difficult to bring development there. That is why we find a government agency which has a proven track record in the joint venture," said Osman.

He said that within a year of the issuance of communal grants in the middle of last year, the state government had issued 33,600 hectares to 7,000 beneficiaries.

"So I do not see why we must stop. It will be a loss, because we have targets (to meet). Right now, the figure of natives owning land in Sabah is only 23 per cent. The target is 30 per cent by 2020, so we can't stop. We need to use both the land application process and communal grants to achieve this (target)," stressed Osman. (DAILY EXPRESS)