‘NO-PARKING’SIGN CAUSE TEACHER IN ICU? 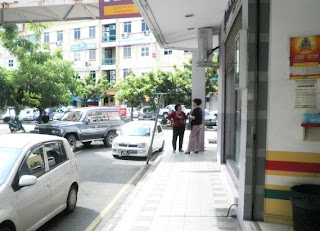 A ROAD-SIGN pole erected on the road surface in Damai, Kota Kinabalu is the cause of a fatal accident that put a kindergarten teacher into hospital Sunday night. The young teacher in her thirties was admitted to the hospital with serious head injury and now she is still in the ICU (Intensive Care Unit). The signage is believed to be a ‘No-Parking’sign.

According to people who saw the accident, a truck passed by the corner of the shop where the driver did not see the pole planted on the road corner, ramped and knocked against it. She was knocked head on instantly by the sign-board pole. She and two other teachers were walking along the pavement (Kaki-Lima) near the shop a few feet away from the road side. The identity of the lorry was not known, because he fled from the scene.

Her condition is critical and due to the serious head injury, she is put under closed observation in the ICU.

Kota Kinabalu Member of Parliament Hiew King Cheu was informed of the accident and some photos were forwarded to him in Parliament.

Hiew said he felt very angry because such a case should not have happened, and a good teacher now became a victim of the wrong doing of the authorities. How can the authorities erect a road sign pole right on the road surface and around a blind corner?

What is the logic and who should be responsible? We want to know who did this. Of course the Kota Kinabalu City Hall (DBKK) cannot discharge from the first responsibility and to be held liable.

Is Kota Kinabalu becoming a city full of danger, and accident can happen anytime? Just imaging she just walked along the pavement and yet can be knocked down by a pole erected on the road surface. This is not acceptable at all.

We urge the KK City Hall to immediately set up an investigation team to prop into the matter, and give us an answer. DBKK should compensate the victim on all medical expenses and cost involved.

There are many other similar danger areas in the City where at anytime can cause accident. These can be simply sign boards erected blocking the drivers’ views, lamp post too closed to the road sides, broken pavements with big holes, dangerous road junctions, dark streets, dead trees and many other aspect which can cause unexpected accident.

We want a safe city and some immediate work must be put in to rectify all potential danger areas. The authorities have to act without further delay. The KK MP office will forward the public complaints and suggestions to the DBKK and other authorities for their perusal and action.