NAJIB, THE ONLY PM VISIT SIPITANG? 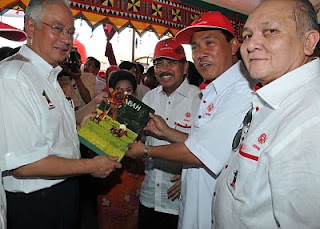 Sipitang the durian town of Sabah is also the gateway for people from Sarawak and Brunei to visit Sabah situated about 8 kilometers from Sabah and Sarawak border.

The Prime Minister is expected to officiate a RM10 million Sipitang esplanade .

He would be in Sipitang town by noon traveling from Tenom via a new high road which take less than 2 hours driving from Tenom.

Sipitang has about 30,000 people. About 60% of Sipitang population is made of Kadayan community, 30% is Lundayeh and Murut and the rest are including Brunai, Chinese and others for 10%.

The main employment provider, a paper and pulp factory also called the Sabah Forest Industry which was set up during Berjaya government in the 70s but sold to an Indian company in year 2005.

Sipitang is a coastal town situated at Brunei Bay, historically had abandon of fish and marine life but now all are dilapidated rapidly. The dramatic reduction of quality of marine life is suspected due to the toxic disposal from SFI to the sea.

Sipitang has changed from all wooden buildings to now of mostly made of concrete. But like any other tows in the state, the design and planning of the town is typically done haphazardly which will take many more years to meet European standard, if Kota Kinabalu can't that wouldn't be a surprise to see Sipitang.

Sipitang may change the composition in future this was highlighted recently in local media with regards to the increase number of foreigners buying local Native Title Land by dubious means, the most common modes operandi is by the used of local proxy.

The case in hand, an eleven acres of land in Kg Ulu Naparan bought by forty foreigners, raised up fund of RM280,000 they used one Kadayan on their behalf, allotted one lot for him as an enticement to build a house.

The Kadayan and Brunaian alike at the surrounding areas are furious of dare the Kadayan take advantage of the situation which some local leaders is still at the investigating stage to bring the matter to higher up authority.

Sipitang town may look pretty for a short while, others argue it wouldn't carter to provide employment which the district is in the dire needs. A half million ringgits cost to build an arch erected a donation by Sabah Land Development is very questionable way of spending public money. A part from badly design and creates unnecessarily congestion long before it should.