ILLEGALS AND UNEMPLOYMENT IN SABAH 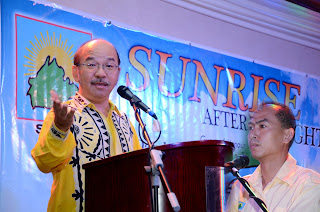 UNEMPLOYMENT among the youths in Sabah and the presence of illegal immigrants are some of the problems affecting Sabahans right now.

"Well, ladies and gentlemen, brothers and sisters let me share with you the fact to support whether the news has something to do with the increasing population in Sabah. The figure was provided by the Home Ministry in 2006 to an answer to our Member of Parliament for Sepanggar Datuk Eric Majimbun during Parliament seating.

"This figure is very alarming and it’s like a time bomb waiting to be exploded, as if the people of Sabah were extra productive in making babies..one wonders," said John.

He said the question is that who is these OTHERS half a million?

"This I believe is the new generation of bumiputra Malaysian and believed to have outnumbered the local Sabahans especially the KadazanDusunMuruts (KDM) today. This so-called new breed of Malaysians also benefited to what the genuine local Sabahan enjoyed all the time such as application of land, education, employment but on the other hand they contributed to the increase in crime and poverty. The genuine people of Sabah have to compete with these newly and instant citizens.

"What is saddening and hurtful was when the ruling government and UMNO leaders denying the real fact and threat of illegal immigrants in Sabah whereas the people of Sabah knew this happening in front of their very eyes.

"The BN and in particular UMNO is responsible in issuing Mykad to this illegal and unqualified new bumiputra Malaysians.

"I like to challenge the ruling government especially UMNO to take legal action against me if what I have said here is false. And today Sabah has a 'Sultan' whereas for 47 years we never heard Sabah had one. Our lifes are always in fear with the scenario and threatening sovereignty of the state. Are you not feeling threatened?" he stormed.

"I called these BN leaders in Sabah traitors of their own races, traitors to the people of Sabah for failing to protect the interest of Sabah people. They are just like the Malay proverbs ‘Harap Pagar, Pagar Makan Padi’”.

John said that Sabahans were made to suffer and face the threat by BN giving Malaysian citizenship to illegals in order to serve their political ends and this is happening on a daily basis.

He said one of SAPP's plan is when they form the state government in the next GE13, its government will issue every genuine Sabahan a Sabah Identification Card (IC) to distinguish from the rest of other Malaysians. This is to safeguard and protect and ensure that only Sabah people benefit from the getting scholarship, land, employment and others.

Touching on unemployment in Sabah, John said that jobs are not easy to catch as job opportunities are less and less because the ruling government has failed to uplift the living standard especially the youth.

Despite Sabah having the natural wealth in the country with abundance oil & gas, oil palm, timber and rubber, it is just unbelievable that Sabah is the poorest state in Malaysia and with unfair policies Sabahans are made to pay the highest of prices of goods. The World Bank report stated that 40% of poor Malaysians comes from Sabah.

"Sabah had to suffer from high cost of living with the lowest wages in Malaysia and our youths were forced to find jobs in the peninsular and abroad to make a decent income.

John also questioned the government's announcement that 40,000 jobs would be available to the people of Sabah through the inception of Sabah Development Corridor somewhere in 2007 and challenge them to reveal the figure on how many Sabahans got jobs since it was launched.

"In 2011 budget, Sabah BN has announced huge allocation of RM210.81 million to the Youth and Sports Ministry compared to RM3.8million in 2009 and RM4.8million last year. Has the amount successfully uplifted the standard living of the youth today? I doubt and the youths today remained status quo.

"I again demand the Ministry of Youth and Sport NKRA success rate to determine whether the ministry has achieved its goal in assisting the youth. Local Sabah were denied at federal government agencies and were given to those from Peninsular Malaysia as in the case of 400 computer technicians with SPM qualification sent to Sabah.

“We also have young adult who have the same skills and SPM qualification but why must the government transfer them to Sabah? The same case with teachers, teachers were transferred from West Malaysia to Sabah. This has made our young newly graduate teachers jobless.

"Is Sabah short of qualified and professional candidate to manage Sabah?" he questioned.