BERSIH SHOULD TAKE UP EC’S OFFER TO TALK 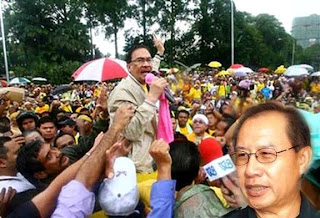 THE United Borneo Front (UBF) has taken the stand that Bersih, the Coalition for Clean and Fair Elections, should take up the offer of the Election Commission’s offer to talk and shelve the planned demonstration on July 9.

Its President, Datuk Dr. Jeffrey Kitingan said in statement here that UBF fully supports all the noble objectives of Bersih, but the current situation calls for all parties to be rational and work to avoid provocation.

“Since the EC has already opened its door to talk and sort things out, Bersih should see that half its objectives have already been achieved,” Jeffrey said.

“Gong ahead with the demo is not the best idea, knowing that it could lead to many undesrable outcomes.”

He said that with extremist Perkasa and Umno Youth now coming into the fray, things could get out of control and lead to street conflicts we might regret later.

“Bersih should also appreciate that after two months in the news, the planned demo had achieved a lot of its objectives through the media attention,” he said.

“It needs to realize that it can still pursue its additional objective through other, more diplomatic means. It can even let Perkasa go ahead with its own demo first and see what happenes.”