BILLION RINGGIT GONE BY THE WIND? 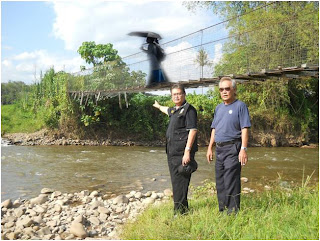 They captured in camera the actual situations related to the bad rural infrastructure that revealed the truths about how much the Government has spent on rural infrastructure development. The revelation was shocking as the poor villagers who were forced under circumstances to depend on the broken and badly damaged suspension bridges to cross over from one village to another risking their lives.

During raining season, the river swells dangerously with fast moving river flood water rushing along the river, posing dangers to lives. The old badly damaged bridges were left to deteriorate without any repairs. Upon close inspection of the damaged bridges, there were broken suspension wires, rotting wooden walk-ways, and broken wooden planks.

One of the old bridges was about to be collapsed at one end with declining wooden structural supports. No body seemed to care about the safety of the poor village folks stated Dr Benjamin in his statement made in Keningau.

Many concerned parents made complaints to Sabah DAP to inspect the badly damaged bridges in Bingkor, Keningau in order to voice for the people's grievances to the authorities concerned.

It was rather unusual that the suspension bridges that were constructed several decades ago were left unattended and deteriorated without repairs and maintenance within the watchful eyes of the local community leaders in Bingkor Lama, Bingkor District, keningau.

Two badly damaged bridges needed urgent repairs were situated along the Bayayo river within the vicinity of Bingkor lama connecting to Kampung Kamawanan and several kampungs.

It was learned that the local residents of Kampung Bingkor Lama, and other adjacent villages such as Kampung Kamawanan, Kampung Kuangoh and others have been frequently using these badly damaged suspension bridges to cross over from one village to another in order to attend schools, visit rural clinic and Pekan Bingkor, in the District of keningau.

During raining season, the river water raises and the current flows dangerously. The village folks often risk their lives.

School children have no choice but to use these old broken bridges despite of the dangers lie below.

The village elders risked their lives being fallen into the river as most parts of the suspension bridges were badly damaged and rotting suspension wires posed accidental risks and endanger the lives of the elders.

The village folks deserved improvement in rural amenities and facilities for a better standard of living.

There is no point for any one to keep telling the rural people of the huge allocation of RM10 Billion when their livehood and standard of living have been denied for so long.