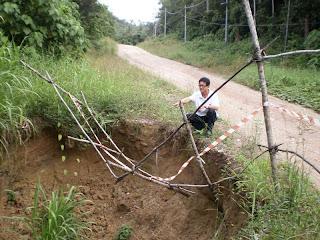 BAD….. Pictures of the bad portion road in Kudat Highway.

THE HIGHLY complained stretch of Kota Belud to Kudat federal highway was again the question raised by the Kota Kinabalu Member of Parliament Hiew King Cheu in Parliament on the 21st of June.

He asked the Minister of Works on when this federal highway from Kota Belud to Kudat which is at its worst stage and frequent accidents had occurred, can be repaired and upgraded.

Hiew also asked why many of the federal highways in Sabah are not being repaired and upgraded, or is it that the government has no money to do so?

The Minister in his written reply said that the government has prepared plans to upgrade the stretch of 70 KM of federal highway from Kota Belud to Kudat.

The project is to be carried out in stages depending on the availability of the allocation approved by the Economy Planning Unit (EPU) and the Prime Minister Department (JPM). Under the 9th Malaysia Plan, there was a project on upgrading the stretch from Kota Belud to Langkon (phase one) with a cost of RM5.9 million.

Under the second half of the 10th Malaysia Plan, the Phase three work will commence with an estimated cost of RM60 million subjected to the approval of the EPU and JPM.

The minister also said that the government has not neglected the infrastructure development in Sabah, especially in the federal road building and its maintenance work. This is proven by the Ministry of Rural development who will build 1,500 KM of rural road in 2010 and 2011.

Hiew said judging on the minister’s reply, we still have to bear with the bad road for quite some time. The phase one upgrading work from Kota Belud to Langkon had been completed with a cost of RM 5.9 million, but the completed upgrading work which was concentrated at the stretch at Kg. Ulu Kukur is now becoming a dangerous and treacherous stretch which can cause serious accident.

Repair is just like no repair at all, and the road surface is settled and heaving up in many places. This is especially dangerous to drive at night. Hiew said he himself had nearly involved in the road accident many times.

There are many places where the road had collapsed and caved in. Some bridges are still in the progress of construction, and we have great difficulties to drive smoothly. The JKR can only manage to come to fence up the big portion of damaged road with warning ribbons and some drums to warn the drivers.

Some portions of the damaged road had been left open like that for months. Are they waiting for fund or instruction, while the road users continue to risk their life? Is it true and common that they are waiting for the whole road completely spoiled and beyond repair then will get a plan to completely redo?

The KK MP Hiew sees that no matter what big plans and allocations there are as mentioned by the minister, the JKR must immediately execute immediate repair on all damaged road section to minimize the risk of road accident. A simple road depression can kill, and the road users are innocent.

On the part of the 1,500 KM of rural roads to be built in Sabah during 2010 and 2011, Hiew asked, do we see the 1,500 km of new rural roads? At the mean while, our Sabahan rural folks still have to ‘plough through’ the muddy and bumpy roads that only fit for 4x4 vehicles and ‘Kerbau’ (water buffaloes). We hope the government will fulfill their promises and give Sabah some decent road to travel on.