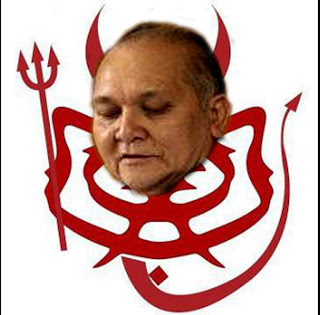 DATUK John Ambrose, the Umno head for Penampang, has claimed that the Umno KDM task force has been in existence from the very beginning of Umno in Sabah, initially led by Tan Sri Kasitah Gadam and Datuk John Ghani, and yet the state Sabah BN Youth Treasurer, Bahrul Razha Chuprat does not recognize it.

Hence, insisting that the movement be endorsed by the coming Umno general assembly, saying "We, the youth leaders, need to know whether this KDM task force has been given the blessing by party President Datuk Seri Mohd Najib Tun Razak. And whether only a certain group of party leaders or all leaders can use it.”

Wait, who is supposed to endorse this, the Umno assembly or the umno president? Already, there is confusion about the matter in the state BN.

Interestingly, John Ambrose, trying to justify his membership in Umno, had implied that KDMs who are in Umno should no longer be seen as traitors to the KDM community.

And so now there is suddenly a new interest to revive the Umno Sabah KDM task force to garner more support from the KDM people.

As a move in this direction Umno gave away a token gift of RM50,000 to poor students in nine schools in Papar last month, with the nice rationale from the task force's Treasurer Datuk Peter Anthony that “There is nothing wrong in wanting to help those in need”.

“Yes, especially if you have an axe to grind (LOL)! But then, is this money for poor students taken from the government’s (the people’s) coffer, from the Umno bank account, or from the private sector?

If it is from the government why is it not distributed by the Papar’s YBs under the state or federal budget, and why is this being doled out by Umno for Umno’s campaign purpose?

Has Umno the right to use the people’s money for its own campaign? If it is from the private sector the Department of Inland Revenue should look into the account of this Santa Claus. I cannot help smelling a rat in the whole thing.

This sudden generousity by Umno through the KDM task force has raised several very important questions. Why this move to revive the task force suddenly after ruling Sabah for 17 years? Is Umno abandoning the BN spirit in Sabah, and now thinks that the KDM-based parties (PBS, Upko and PBRS) are no longer necessary for BN?

Is Umno saying that these parties have failed to get the support of the KDMs for the BN, and now Umno is stepping in to get these KDMs to come into BN through Umno instead?

Is Umno preparing to rule the state all by itself after getting the KDM support, and by that time it can say to PBS, Upko and PBRS that, “Now, you can leave BN if you want!”? It looks like it.

Umno has become so arrogant that it thinks it can rule the state all by itself soon, as indicated by its moves to ask for KDM and Chinese seats to be given to it in the next general election.

Even Datuk Marcus Mojigoh had said, “Go ahead, take my seat!” and Tan Sri Joseph Kurup had threatened to reevaluate its position in BN if Umno insists on taking his sole and precious Pensiangan seat.

Does this mean Umno is trying to pinch away support from the KDM-based parties? But Umno itself had started whining recently accusing ‘other BN components’ of pinching away its members! So is Umno saying it is alright for it to do this kind of thing to its fellow BN components but won’t stand for it if the other components do the same to Umno? There is a name for that kind of attitude, hypocrisy!

Another issue to the whole thing is the matter of morale for the KDM community. Let’s not forget what Umno does at every Umno general assembly. The number one emphasis is always for the future of the Malays – Malay this and Malay that – Malay future, Malay special rights, Malay privileges, Malay shares, Malay rulers, and of course, Malay superiority and supremacy.

How does a KDM Umno member feel in the middle of those shouting and holding up of the kris during the general assemblies every year? Even just by watching the whole thing on TV, there is a whole lot of alienation and blatant discrimination against non-Malay members from Sabah in the whole tone of the assemblies.

I can never forget the time Datuk John Ghani speaking with high spirit in one of the assemblies in his Kadazan costume because it was to incongruent and against the spirit of the KDMs. Datuk John, thankfully, has since withdrawn from the whole charade.

At one time Datuk Seri Chua Soi Lek left the assembly hall saying, the whole thing did hurt his feelings. So far no KDM Umno leader had ever said anything about how they felt. I bet many are not happy, even ashamed of their own political struggle in Umno, but they are too cowardly to say it.

Some may even try to psycho themselves into thinking that they are Malays. But we all know that the rationale of it all, even when using the ‘rumpun Melayu’ rhetoric, KDMs are still KDMs, and Umno is still a Malay party from the Peninsular. Before independence there were no Malays in Sabah.

Let’s us not forget that Umno was established for the cause of the Malay history and struggle, with the unending shout of ‘Hidup Melayu!’ and ‘Takkan Melayu hilang di dunia!’

At one time many people suggested that Umno be change to United Malaysia National Organisation but it was rejected outright by those who believe that, do or die, Umno must remain as a Malay vehicle forever. It is only in Sabah that Umno has compromised on the terms of its membership by allowing non-Malays to become members (including Chinese!) all for political expedience.

But the moment they step off the plane in Kuala Lumpur, they become anomalies among the Malays, and seen only as political instruments (or traitors) for the conquest of the stubborn Land Below the Wind.

We can see that now, because of our own weaknesses, we are splintered into so many political parties. Our own leaders who were too corrupt and easily swayed could not even unite us under own political umbrellas.

The Huguan Siou has been a failure and is no longer fighting for our future. If only he had focused solely on uniting the KDM and not got himself embroiled in politics by leading another KDM party, our fate would have a lot different.

Is it too late for a revival of a true Huguan Siou leadership? Maybe, maybe not, but PBS is too much in a dilemma today to do what is right, which is to sever its ties with Umno/BN once again and start a new revolution.

This is all despite the fact that it was Umno who robbed power from PBS and thereafter caused so many of our problems in Sabah. It implemented the infamous Projek IC and caused a drastic increased our population within a few years, and worse, it made Sabah the poorest state in Malaysia.

Whatever the KDMs’ excuse for being in Umno, we know very well that the arrangement will always lead to self-destruction for the community in the end. Many reason that “We need to move forward,” but joining Umno is a moral defeat and surrender for us. History has proven it, but we never seem to learn anything from the hard and painful lessons.