OIC NEED TO GO BEYOND RHETORIC 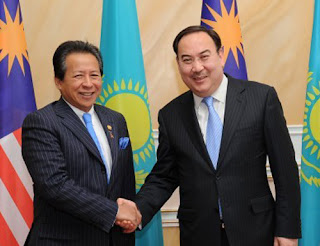 THE ORGANISATION of Islamic Conference must go beyond rhetoric and reinvent itself in the context of the new realities and challenges facing Muslims, Foreign Minister Datuk Seri Anifah Aman said from Astana (Kazakhstan).

He said the relevance of the OIC in today's world was being questioned as was its credibility and effectiveness.

"Are we so helpless that others are able to influence and dictate our decision making? We need to build on our strengths and abundant resources to raise the OIC to be the voice it should be for the Muslim world," he said at the 38th OIC Foreign Ministers Meeting here Tuesday.

Anifah, speaking on behalf of the Asian region at the three-day meeting, said the 57 OIC members must have a clear road map and action plan to achieve their vision and common goals.

He said the OIC should strengthen bonds of cooperation by increasing intra-trade among members and with economic entities outside of the organisation to achieve greater economic stability and clout.

Anifah outlined Malaysia's proposal for an Implementation Coordination Unit, headed by a senior and experienced official, to be established under the OIC Secretariat, to oversee, streamline and coordinate the various programmes and initiatives undertaken by member countries.

He said that it was 'Critically important' that the OIC continuously prove to the world that it is a credible player to be reckoned with in the international arena and a voice not to be ignored.

Anifah also reiterated the steadfast support of the government and people of Malaysia for the restoration of Palestinian's inalienable right to self-rule and ultimately the establishment of an independent state of Palestine in the ‘very near future’.