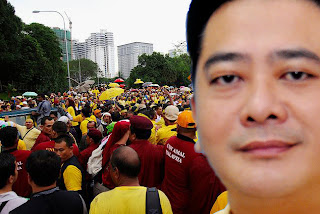 SABAH Progressive Party (SAPP) Youth strongly support the efforts of Bersih on their 8 demands which should be acknowledged and respected. It’s Youth Leader, Edward Dagul said that it is the constitutional right of every Malaysian to voice his or her opinion, irrespective of the political inclinations.

"The 8 demands by Bersih should be respected and supported and if the voice is unheard, then the natural tendency of grouping takes over. The voices of the rakyat in wanting a free and fair election should not be stifled.

In the Bersih set up, the steering committee members have continuously stated that they are apolitical. Haris Ibrahim was quoted as saying, “We say again and again, Bersih is not pro-Pakatan Rakyat. Neither are we anti-Barisan Nasional. We are pro-reform.”

Edward emphasized that the image of a stronger, independent EC would only help to boost Malaysia’s standing as being a proponent to fair, transparent and just governance. The demands by Bersih are similar to the 8 points declaration by the Party especially…”that the government shall be of the people and based on Good Governance and Civil Society.”

"It is common knowledge to many that the current electoral system is riddled with faults to the extent of being biased to the government. The political gerrymandering of boundaries over the years, as well as the much talked continued presence of phantom voters within the electoral list are but a few of such examples in Sabah. Therefore, the demands by the Bersih organizers are justified and their proactive approach should be commended in making the country a more respected nation.

"Many have complained of the Election’s Commission bias and our own experiences in Batu Sapi as well as the recently concluded Sarawak State elections are testament to this. SAPP has made numerous reports of election offences and other irregularities with the Election Commission but unfortunately, till now, no action has been taken.